Zaka Sends a Letter from Japan... 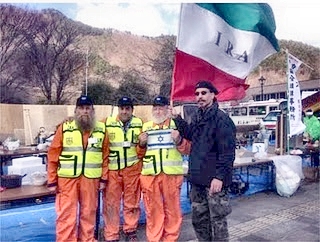 One week ago today I arrived in Japan. Our team of ZAKA Search and Rescue volunteers landed in Tokyo. After spending Shabbat there, we drove North to  Kamaishi, Japan. Devastation caused by the earthquake-tsuanmi of 5 Adar II (11 March) was breathtaking. Literally breathtaking. The smell of death was everywhere. After helping Japanese and other international teams recover and identify bodies, we were asked to help with food distribution to surviving residents.
It was only while serving food that we noticed the Iranian flag flying over the station. After a brief moment of both teams feeling awkward, we all put aside our political views in order to carry out our shared humanitarian mission. You can see more of our mission in photos at this link.
When I consider our delegation's work, helping people who know little if anything about Israelis or Jews, I am convinced that when they saw us, they came to learn about our country. This is a tremendous Kiddush Hashem [sanctification of Gd's name]...We show Israel's good side.”
I return to Jerusalem with the sad but certain conviction that ZAKA's hardest work has only just begun. While praying that violence against our country and our people will be passed over in this holy season of Pesach, ZAKA's volunteers remain on full alert.
Help us prepare. Donate to equip our volunteers. Join the ZAKA family.
Todah raba,
Yehuda Meshi Zahav
ZAKA Chairman and Founder
Posted by Jerusalem Vistas~Israel Vision at 4/10/2011 04:58:00 PM