Terrorists Murder and Riot in The Holy Land 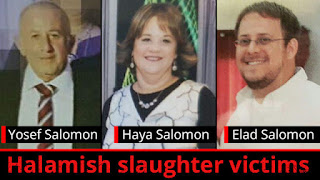 When Will it Stop?

On Friday, 21 July 2017, a family sat down to the Shabbat table to celebrate the Sabbath and the  birth of a baby boy. This should have been a time of great joy.

Instead, a "palestinian terrorist" broke into their home and began stabbing.

By the time he was stopped, he had murdered grandfather, Yosef Salomon, 70; his daughter Chaya Salomon 46; and son Elad Salomon 36. Elad was the father of five young children. His wife managed to close herself and the children in a room and call for help. Yosef’s wife Tova, 68, was seriously wounded. What caused this unwarranted attack on peaceful, innocent people?

The terrorist claims it was for "Al Aqsa". This is nonsense! Let's examine the facts:

* One week ago armed terrorists exited the Temple Mount with weapons, and  murdered two young Druze police officers and wounded a third officer guarding the area.
* Israel then set up electronic metal detectors at all the entrances.
* The Mufti said all should refuse to enter and protest until the security was removed.
* All who went through the detectors were allowed to enter and pray.
* A video released by MEMRI TV had been posted on the Fatah Facebook page (see video below) shows Mahmood Abbas calling for protestors to "bare their chests" claiming "This is our Al Aqsa, This is our Church of the Holy Sepulcre" .

Whoever thinks throwing rocks is harmless, have a look at the slingshots they use and the size of the rocks. This is what David used to kill Goliath and what many use to this day to hunt. The rioters did not plan to "bruise the arms", rather, they were out to kill.

* As a result, during the riots three of the arab rioters were killed

The whole idea of objecting to security checks is hot air. All over Israel there are security checks in almost every building and store and everyone is checked. Jews and Christians go through security to reach the Western Wall.

A key point, as many in Israel have witnessed, these same Arabs who are screaming so wildly about metal detectors, have no problem going through those same security checks at the airport or most poignantly, at the offices of Israel's Bituach Leumi where they rush to collect their welfare cheques! The idea of protesting metal detectors is ridiculous hypocrisy~just have a look at the electronic security in Mecca! Why has there been no complaints about that?

They don't want security on Temple Mount entrances because then they cannot store weapons...simple!

And where is the world on this? Burning Israeli flags and condemning Israel because arab terrorists, who ambushed and murdered police officers, were killed themselves; then rioting arabs attempting more destruction saw three more killed. And of course, they will surely blame Israel because an arab terrorist slaughtered three family members at the Shabbat table.

United States Ambassador to Israel David Friedman expressed his condolences for the victims of the Friday night stabbing attack on his Twitter account late Saturday night.

A terrorist broke into a home in the West Bank town of Halamish (Neveh Tzuf), murdering 70-year-old Yosef Salomon and his children Chaya (46) and Elad (36 years old and a father of five) on Friday night.

Halamish: I have no words to describe my sorrow for the victims or disgust for the terrorist act that killed a family at their Shabbat table .  Ambassador Friedman (@USAmbIsrael) July 22, 2017

The terrorist was eventually neutralized by a soldier who was in the area and heard the sounds emanating from the scene.

Please Take the Time to Listen to These Passionate Christians Speaking for Truth!
Posted by Jerusalem Vistas~Israel Vision at 7/18/2017 02:44:00 PM No comments:

A Look at the Wonders of Israel~Above & Below Ground~New and Historic
Posted by Jerusalem Vistas~Israel Vision at 7/13/2017 10:51:00 AM No comments:

The Real Truth About the Refugees

The fact is, people no longer do conscientious research...they rely on Google and online fact checkers. The end result is the death of truth and the rise of a political correctness that causes people to attempt to change the truth to what they would like to be.

Those who are interested in truth should be willing to investigate events and accept the facts as they happened~even if they are uncomfortable facts! Perpetrating a lie will never end up well.

Former Amb. Danny Ayalon Exposes the Lies That Have Now Become Leviathan
Posted by Jerusalem Vistas~Israel Vision at 7/10/2017 11:34:00 AM No comments:

The Truth About Jerusalem~UNESCO Needs to Watch This!

Former Ambassador to the USA, Danny Ayalon Gives the Real Facts
Posted by Jerusalem Vistas~Israel Vision at 7/07/2017 10:39:00 AM No comments:

Should Jerusalem Remain United or Be Divided?

These Interviews Were Done By A Non-Jewish, American~What Do You Think?
Posted by Jerusalem Vistas~Israel Vision at 7/06/2017 10:35:00 AM No comments: