When Your Job Description Suddenly Changes! 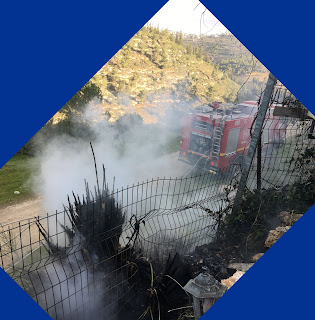 Living in Israel one gets used to unusual things happening.

Early this morning as I arrived at work, I walked to the window to look out over the valley. Even in winter the scenery is constantly changing~sometimes a new flower, or even a herd of sheep and goats passing down the fire road at the bottom of the property.

As I gazed out I saw huge orange flames shooting up from the bottom of the yard~Fire!

Not sure I was seeing correctly I looked again and raced downstairs to Meridel.

* We were the only ones in at the time!

"Meridel", I asked, "are you burning something outside?" 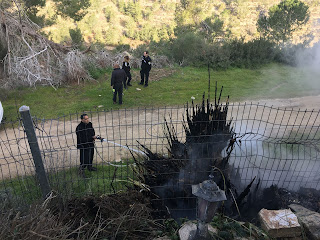 We had a fire! We flew outside to find the hoses.

For reasons unknown to us, when we turned the tap on a small dribble was all that came out. Much fussing and straightening of the hoses did little to bring change.

While Meridel grappled with the hose, I grabbed a bucket and began running back and forth. Bucket after bucket brought a slowing of the flames.

A neighbour dog-walker came by and said he would call the fire department.

By the time the fire truck arrived, our dribbling hoses and buckets of water had taken some effect~there was now more smoke than flame. 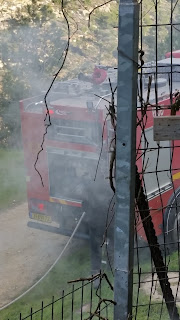 Nevertheless, the fire department hooked up their hose to to douse it; completely putting it out. Then they had to open up the area, soaking the section where the flames had been concentrated.

The real danger was across the road. The entire area opens onto dunams of dry grass and trees. If the flames had crossed over, or the wind had blown a spark there could have created a terrible incident.

In short order we were back inside, slightly damp and stinking of smoke. We lamented that we forgot to take a picture until it was all over. Honestly, the flames did look very dramatic!

We did not, however, forget to thank God that we were alerted to the flames and were able to control them until the fire department arrived!

Sending You Light From Jerusalem

Our "Christmas Card" Will Remain At the Top of The Blog Until The End of The Holidays
A Blessed Christmas and a Very Happy New Year in 2019~From Israel With Love!

The Land of Israel~Desolate Until The Jews Returned

The Miraculous Relationship Between The Jewish People and The Land of Israel!

Until Today No People has succeeded
in establishing National Dominion in the Land of Israel.
No National Unity or Spirit of Nationalism has acquired any hold there.
The mixed multitude of itinerant tribes that managed to settle there
did so on lease as temporary residents.
It seems that they await the return of the permanent residents of the land.
...Modern Science in the Bible Lands...by Sir John William Dawson (1888)
Posted by Jerusalem Vistas~Israel Vision at 1/03/2019 01:58:00 PM No comments:

Sing Along to Auld Lang Syne by The Royal Philharmonic Orchestra
Posted by Jerusalem Vistas~Israel Vision at 1/01/2019 12:00:00 AM No comments: