This story caught my attention on Bare Naked Islam--there are more links at their site. Although the main stream media is not really discussing it, Ivory Coast is apparently divided between the existing president, Laurent Gbagbo (Catholic) and Alassane Quattara (Muslim). Apparently Quattara has now gained control and has arrested Gbagbo.
The picture below is from the same site. I urge you to go to their link HERE and read it carefully. On Monday 11 April 2011 it was reported that at least 1,000 Christians were slaughtered in the past week at the Salesian Saint Teresa of the Child Jesus mission in Duekoue, Ivory Coast by Muslim troops loyal to Alassane Ouattara. Reporting from state-run media has been slow, and it seems that a massacre did not stop the new world order of President Obama, the European Union and United Nations from supporting Alassane Quattara.
The video following this picture is from the massacre. Be Warned! From 1:15 the film is very graphic. The entire film appears to be from a cell phone--it is loud, frantic and frightening. View at your own discretion... 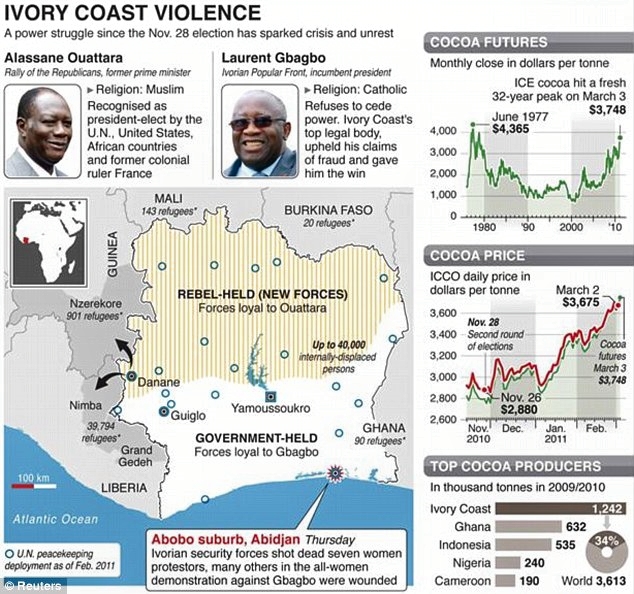 While I have not been following this story in detail, I have read much about the fighting being (yet again) between Muslims and another faith--in this case Christian.  The main stream media is not making a fuss--but the internet is screaming with outrage. Do a Google Search for Salesian Saint Teresa Duekoue and see for yourself--a quick search showed 30,500 results.
Here in the middle-east, every country Except Israel is being cleansed of all but the faith of Islam. Yet, whether it is the attacks on the Coptic Christians in Egypt or the slaughter of a Jewish family in their beds, it is low key reporting at best. The indignation and outrage are only heard when Israel approves "planning" of kindergartens and apartments in Jerusalem.
I strongly urge you to learn more. Follow the links above. Read carefully--ask questions.  In the face of ethnic cleansing of Christians and Jews, why is the UN talking about enforcing a No Fly Zone over Gaza to prevent Israel from defending it's citizens? Why do they want to open the borders for Hamas so they can  re-arm? Why do they want to force Israel to uproot more than 500,000 (Five Hundred Thousand) Israelis and give the land to the PA and Hamas for their "new" state (without any negotiations) to the very people who have sworn to destroy Israel? By the way the PA is asking for billions of dollars to be donated to build their "new state" while not a penny is offered to the potentially 500,000 displaced Jews. Why is the world backing terrorists? If this comes to pass, the slaughter you see in the below film will be nothing compared to what the Arabs surrounding Israel will try to do if they are given leave to displace Jews from their homes.  Of course Israel will fight back--then what? Will the UN bomb Israel? What about Iran and their nukes? And one more question...if they did kill all the Jews--who will they go after next?
1,000 Christians Slaughtered by Muslims in Ivory Coast
Posted by Jerusalem Vistas~Israel Vision at 4/14/2011 11:21:00 PM