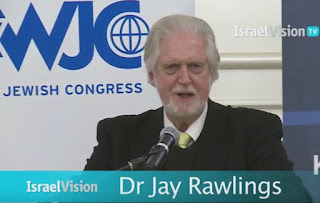 Last week we posted congratulations to Jay Rawlings for his lifetime achievement in his media work for Israel. The ceremony was held in the beautiful Waldorf Astoria Hotel in Jerusalem.

There were many in attendance from both the Jewish and Christian communities.

There were many interesting comments and speeches. Unfortunately it is impossible to show the entire evening.

We have compiled a video of some of the key comments as well as Jay receiving his award along with his acceptance speech. Enjoy! 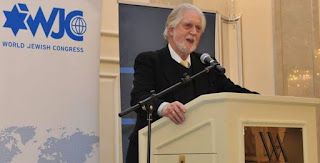 We, the Rawlings family, will follow You
to the ends of the earth!
...Daniel, Josh, Chris, David, Meridel and Jay


On 28 January, 2016 Dr. Jay Rawlings received a “Life Time Achievement Award” from the World Jewish Congress and the Christian Allies Caucaus during a dinner at the Waldorf Astoria Hotel in Jerusalem.

David and Joshua and granddaughter Maya were in attendance. Meridel was in New Delhi India on the last leg of her Nepal journey and Daniel continues his filming work in Nepal. 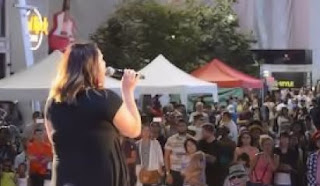 Christians in Toronto spoke out, and after a fight they have won their case. So just what is this about?

In Dundas Square there are many events that take place. For the past five years, a Christian organization called Voices of the Nations has held an event to "promote diversity within the Christian Community by showcasing its mosaic of fine arts and music" .

Suddenly in October of 2015, they were informed that they would not be issued a permit for their next festival because "praising Jesus in their song’s lyrics contravenes the city policy against “proselytizing.”

Go back and read that again...they were denied a permit for their concert because they sang about Jesus! Now consider that they do not stop Muslims from setting up booths for the express purpose of “proselytizing” (ie) converting people to Islam. Likewise when Omar Albach, a Muslim University student blasted out the Muslim Call to Prayer, not only was he not stopped, he was not even warned by the police!

Whatever happened to Canada as a Free Country with Freedom of Speech??

Whether you are a Christian, Jew or do not hold by any faith at all this should cause great concern. If you are Christian this is a wake up call! Christians in the middle east are being persecuted and slaughtered for their refusal to turn their backs on Jesus. If  Christians in the west continue to placidly sit back and "hope it will blow over" you will soon find yourselves on the run just like your brothers and sisters in the middle east~and note that nobody is rushing to take them in as refugees.

Below is the story. Listen carefully to the exact words of the bigoted woman who denied the permit...and remember if you are not for your faith~who is?


Listen to the Bigot Deny the Group Because they Sing About Jesus! Then Hear the Good News!
Posted by Jerusalem Vistas~Israel Vision at 2/08/2016 10:56:00 AM No comments:

Brigitte Gabriel~Islamic History You Should Know

Please Listen to What Brigitte Has To Say! Learn The History~Learn The Facts!

Angel Merkel Must Be Held Accountable For Her Policies~Is She Ignoring the People?
Posted by Jerusalem Vistas~Israel Vision at 2/01/2016 02:02:00 PM No comments: