The Truth From a Saudi Author~Honesty Like This is Needed...

Saudi Author Hani Nakshabandi:  We Should Re-examine Our History Books...

The Peace Process~Here We Go Again!

Dr. Jay Rawlings Explains the Peace Process and What the Bible Has to Say...

The "Muslim Brotherhood" Claims to be "Peaceful"~There Are No Words...

The Muslim Brotherhood Must Be Eliminated... 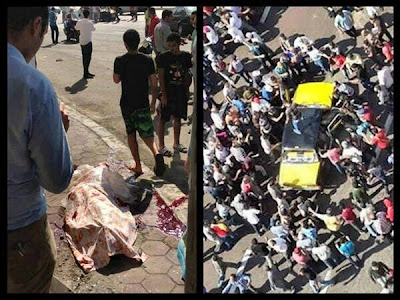 From what I have been able to learn, it began with a taxi driver travelling on a street in Alexandria, Egypt. What happened next is disgusting, but typical.

The driver had a Christian cross on his dashboard~because he was a Christian. Supporters of the Muslim Brotherhood (the ones who say they are so peaceful) spotted the cross and the rest is history...but not necessarily news.

The mob dragged him from his cab~a typical lynching. Judging from the blood, he died a horrible death. The "brothers" then proceeded to torch the cab.

This is not a "one of" situation! Christians are under attack in Egypt, and in every Muslim country. Islam does not tolerate anything other than Islam! They even kill each other. The only thing they know is brutal, barbaric slaughter. NO courts, NO trials, NO chance. That is Islam, and the top of the manure heap is the Muslim Brotherhood. They were at one time Banned~yes, Banned! Apparently some liberal decided that because the "brothers" were wearing suits they should be given a chance. Hows that working out now?

Islam is Bringing War to The Middle East~Are You Ready?

An Excellent Report from Eric Stakelbeck as He Fills in on The Blaze...

A Celebration in Jerusalem's Old City 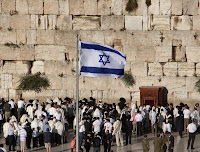 Jerusalem is a large city, boasting approximately 840,000 residents~and then there are the tourists! Although there are many sites to see, the most popular is of course the Old City and within that, the Kotel or Western Wall.

When Herod was made king in Jerusalem he began a huge renovation of the Temple Mount, that consisted of flattening the peak and building four supporting walls around it. The western support wall is what we now know as the Kotel, Western Wall or Wailing Wall. It's uniqueness is due to the fact of its close proximity to the Holy of Holies in the former Temple. For Jews, this is their Holiest site.

Every day you will see men and women praying in the plaza that extends from the wall. There are also public prayers on the High Holy Days, and Jews from around the world come to the Wall to celebrate weddings, Bar Mitzvahs and Bat Mitzvahs (coming of age) and other Simchas (celebrations).

In the video below, our Vistas crew were in the Old City when they came across a parade of people. They were singing and dancing their way through the streets to the Western Wall. The celebration was for a Bar Mitzva. You can see the young boy walking under a Chupah (a cloth, usually a prayer shawl, tied to four poles carried by friends or family). Everyone, young and old, joins the celebration!


Life in Israel is Filled With Joy !

Listen to the Facts~Then Ask Yourself Why This Is Happening in the USA??

Just For Interest~Here is Another Opinion...

Terror Unmasked~Why is the Middle East So Violent?

Murderers to Be Released~How Will That Bring Peace?

Released PA Killers Will Kill Again~They Brag About It~But Nobody is Listening...

Iranian Funded Hate Thrives in Canada~Murder, Destruction of Israel Tops the List
Posted by Jerusalem Vistas~Israel Vision at 8/07/2013 08:52:00 AM No comments: