Chanukah and Christmas in the Holy Land

This year Israel was celebrating Chanukah and Christmas back to back. Throughout the country Menorahs were being lit each night for eight nights and children played dreidel while the adults noshed on sufganiyot and latkes. It is common for the Menorah and candles to be placed outside the house. Glass boxes are used to protect the delicate flames from the weather
Israel is a very diverse country~her citizens come from all over the world. In no other place can you stand in a street or shopping center and hear hundreds of languages and dialects being spoken by people who hail from the Middle-East, to China, Russia, the Americas, Europe and even Lapland. The  entire world is well represented in Israels' citizens.
At the beginning of the week, David traveled to Bethlehem, to visit the Church of the Nativity. Two musicians from Italy were also in Bethlehem to serenade the coming of the birth of Christ. The grotto was cleared and the two musicians sang their song to the tune of Brahms Lullaby . At this time of year, it was a rare privilege to stand alone, in front of the silver star beneath the altar, in the Grotto of the Nativity. With the soulful sounds of the young woman from Italy filling the grotto, it was a beautiful, meaningful experience.
At the same time, just outside the Church of the Nativity, in Manger Square, there was a "Rock to Bethlehem Celebration" much to the joy of the young crowd. Meanwhile, in Mevasesret Zion, a group of youngsters from the  Orot Ha Bama and Limelight dance studios performed in the Har El Mall. They entertained shoppers with Israeli dances, and of course something modern as well! The celebrations will carry on over the weekend throughout the country as our diverse citizenry is joined by millions of tourists from around the world.
From all of us at Jerusalem Vistas/Israel Vision, we wish you, our very dear friends, a most Blessed Christmas Season and a Healthy and Happy New Year!
Posted by Jerusalem Vistas~Israel Vision at 12/29/2011 07:41:00 PM No comments:

Happy New Year From the IDF!

Christmas Songs from the Middle-East

I have no way of confirming if the language used in these three videos is authentic, however, they are of great interest.

Remember that Christians are a persecuted minority in Iraq, and  indeed in all Muslim countries in the Middle East. Many have immigrated to the west, but as in the case of many migrant communities, they have for the most part have retained their language, customs and religion.

The second and third video are sung in Chaldean Neo-Aramaic and the second video has sub-titled the lyrics. The first song is Assyrian, and the only information given is that it was produced for a Church of the East Christmas Production in 2006.

The songs are titled: Qa Deyan Pishlokh, (an Assyrian Christmas Song), Come All Ye Faithful (Hayyo Ya Mhuyumne), and Ava Maria (Shlama Illakh Mariam). The second and third videos  are both sung in Chaldean Neo-Aramaic.

All I Want For Christmas~A Happy Ending...

The Real Israel~You'll Never See This on The News!

The Occupy Crowd vs. The Nativity Scene

This (interesting) item came to us from a dear friend:

Washington, DC, December 13, 2011...Joel C. Rosenberg~I read a fascinating story in the Jerusalem Post this morning and it gave me fresh hope for the nation of Israel.

"Netanyahu announced the establishment of the study circle on Friday at a ceremony marking 30 days since the passing of his father-in-law, Shmuel Ben-Artzi. The study group will be named after Ben-Artzi, a noted poet and Bible teacher.

Both Ben-Gurion and Begin, when they each served as prime minister, hosted regular Bible study groups. Netanyahu said he was establishing the class to perpetuate love of the Bible."

This award winning film recounts the history and struggles of the Jewish people beginning with the time of the early Zionist movement.

You will see how politics, finance and oil have played a part in isolating the only sliver of democracy in the middle east. Nothing has changed
We are pleased to present you with this 74 minute film in nine parts. Our website has the full version posted in a single part at:

The Truth About the Palestinian Refugees:

What is Happening in Canada? 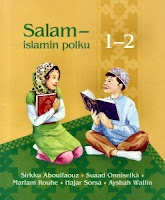 Just days ago it was reported that there is in fact a shortage of teachers~for Islam~in Finland. Accordng to Ahlul Bayt News Agency many of the current teachers are immigrants, but in recent years they have been joined by Finnish women who  have converted to Islam. Even so, there is still a shortage of Islamic teachers.
The first official text book, Salam--islamin polku, or "Salam--the Path of Islam" has just been released for children in the first and second grades. Books for higher grades are due to be released in the spring of 2012.
Currently the Helsinki elementary schools are 8% Muslim. The "Teacher's Education 2020" report predicts that in 2020 a quarter of students in the capital region will be of immigrant origin. (Ed: I suspect that the numbers will be substantially higher and that conversions will increase.When Finns marry a Muslim it is the Finn that must convert to Islam~If a Muslim marries a non-Muslim these are considered invalid marriages)
Egypt Today reports Finland has the most liberal immigration policy in Europe:
"Tara Ahmed, a 25-year-old Kurdish woman, came with her husband to Finland seven years ago to work. 'There are a lot of services offered to us here,' she says. Like most immigrants, Ahmed and her husband took advantage of the free Finnish language lessons offered by the government, which pays immigrants €8 per day to attend. The government also provides immigrants with a free home, health care for their family and education for their children. In addition, they get a monthly stipend of €367 per adult to cover expenses until they start earning their own living. 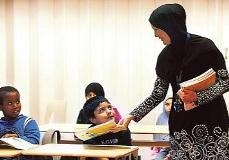 After that story was published, the number of Muslim immigrants to Finland skyrocketed. For example, immigration from Somalia alone more than doubled in 2010, from 2009. Most of the Somali adults coming to Finland are illiterate. In September 2010, Finnish authorities admitted that Somalis were abusing the family unification procedure to facilitate human trafficking.
Finland's largest cities now have areas where more than one-fifth of the population is of foreign origin, which is causing native Finns to move out sparking claims that it has reduced the population capable of paying taxes, leaving behind only those consuming welfare services. 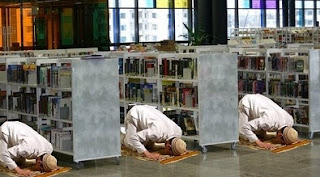 Although the immigration is now primarily from the Middle-East and Africa, Islam was first introduced to Finland by the Baltic Tatars in the 19th century. The came as merchants and soldiers, then were later joined by other family members. Yes, this is still happening~all around the world. Boatloads of men seek "illegal" entry, then once they have a foothold, they bring their families...which generally include multiple wives and many, many children.
Finland, like every democratic country, is being pressed to build mosques and Islamic centers,  supply prayer rooms with special washing facilities. There are a number of  "Islamic Societies", and a Muslim social networking site, "Muxlim". There are an abundance of sites offering Muslims advice on remaining separate from the native population while working to their own "ways" established, which includes finance, halal food, bans on alcohol and pork, separation of genders and having all women cover their hair. Can Finns cope with the changes?
Posted by Jerusalem Vistas~Israel Vision at 12/01/2011 03:44:00 PM No comments: