Palestinian TV~This Is Incitement for Arabs to Murder Jews

This Is What PA Kids Are Really Fed Daily~Not Winnie the Pooh or Sesame Street!

Annual Nehemiah Award at the 2015 Feast of Tabernacles

On 30 September 2015, in Jerusalem, Drs. Jay and Meridel Rawlings received the Nehemiah Award in recognition of their forty-six years of documenting Israel's historic and Biblical cause via visual and print media.

We posted the short bio from ICEJ when the award was announced. You can read the article by clicking HERE

This annual award was presented by the International Christian Embassy Jerusalem, at their yearly Christian celebration of the Feast of Tabernacles. In attendance were four thousand delegates from eighty countries.

Below you can see Jay and Meridel receive their award along with some of the highlights of their vast career in sending out the Good News from Zion.

The Lord gave the word;
Great was the company of those who proclaimed it...Psalm 68:11 (NKJV)

The Ten Commandments are always displayed as two tablets, each containing five statements. The five contained on the second tablet all refer to how we must treat our fellow human beings.

Most people would state that the sixth commandment is "Do Not Kill." This is understandable because the classic King James Bible translates it this way. But the English language has changed since 1610. Furthermore, Hebrew has two words for killing just as English does. The correct translation is "Do Not Murder." Once you grasp this, the meaning of the commandment changes entirely...Dennis Prager


Deliberately taking the life of an innocent person is the most terrible thing we can do...

Terror in The Holy Land~A Video by Jay & Meridel Rawlings

Here in Israel we actually "see" what is happening on a daily basis~not what the world press wants you to know. Reports online only cover more serious incidents. What the world at large is not aware of is that Jews and Christians are being targeted, for abuse and attacks on a daily basis to the point where many are now choosing to stay home behind locked doors and drawn blinds.

In the video below, Jay and Meridel Rawlings speak of the ongoing terror, and Meridel reminds us that Mahmoud Abbas also lays claim to the Church of the Holy Sepulchre!


“They have said, “Come, and let us cut them off from being a nation,
That the name of Israel may be remembered no more”...Psalm 83:4 (NIV)

Along with actual clips that are being shown multiple times by "Palestinian TV" you will see. that from Mahmoud Abbas to young children the spirit of hatred and incitement to "Murder" is out of control!

Please stand with us as we strive to report the news from a grassroots, Biblical perspective.


No weapon formed against you shall prosper,
And every tongue which rises against you in judgment, You shall condemn.
This is the heritage of the servants of the Lord, And their righteousness is from Me,”
Says the Lord...Isaiah 54:17 (NKJV)

~5~ Honor Your Father and Mother

Now that the high holidays are over we will continue with the series on the Ten Commandments.

Although almost everyone is familiar with these basic rules of life, we often do not take time to actually think them through and contemplate their meaning.

It is very easy to read a simple sentence and interpret it at face value, without seeing the deeper meaning. On the other hand it is all too easy to spend large amounts of time digging and trying to find a deeper meaning when in fact it is the simple rule that applies.

In this continuing series Dennis Prager tells us that children owe their parents one thing. Many will be surprised to learn that it is not love. The Bible does not direct us to do the impossible, and sometimes it's difficult or even impossible to love your parents. Be that as it may, it's almost always possible to honor them, and that is what the fifth commandment is all about.

"If you build a society in which children honour their parents, your society will long survive. The opposite will lead to self-destruction."

In this short lesson we learn what the fifth commandment means and why it's so important. One important point from the lesson for you to consider: if your children see you honouring your parents they are much more likely to honor you. The importance of honour especially towards one's father is even mentioned by Sigmund Freud, the father of psychiatry~who was an aethiest. He theorized that one's attitude towards one's father largely shaped one's attitude towards God.

You can also view this Ten Commandments series at Prager University


~5~ Honor Your Father and Mother

Terror in Israel~This is Our Life (Only Four Days Worth)

The terror attacks in Israel are so frequent that only the most severe are reported, and even then, the world press manages to re-phrase the attacks to make it appear that Jews are killing Arabs.

This is not true!

There are people whose homes are attacked each day. Many Jews are afraid to leave their homes. It is telling, that in one neighbourhood last Shabbat, the Arabs were strolling freely through the streets and having Bar-B-Que in the parks, while the Jews were closed in their homes with the shutters down. Jews can't even sit outside on their balcony for fear of Molotov cocktails and stoning.

In a stabbing last week in the Old City of Jerusalem, two men died, a two year old toddler and mother were injured. When the mother tried to run for help, the Arabs in the surrounding shops and on the streets, spit, pushed, kicked and abused her. This is the reality.

Below is a screen capture of a poster listing "some" of the attacks that took place over a four day period. Keep in mind that the majority of terror attacks are not even mentioned. Is it any wonder that the Police and IDF are shooting back? Would you sit back and be murdered?? 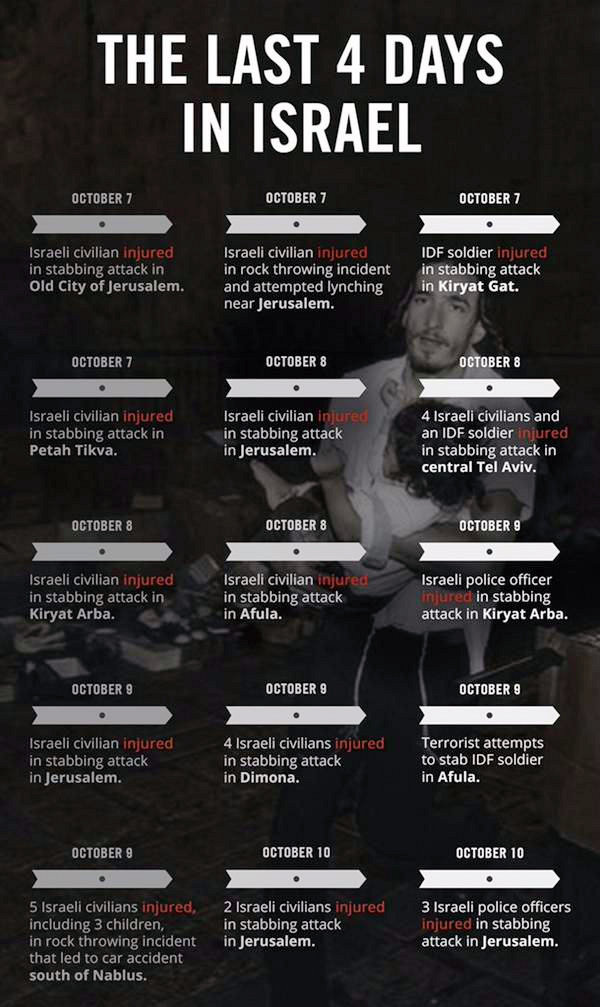 Col. Kemp's visit was hosted by UN Watch & NGO Monitor. He spoke on behalf of Amuta for NGO Responsibility.
Posted by Jerusalem Vistas~Israel Vision at 10/11/2015 04:05:00 PM No comments:

The Nehemiah Award
The Feast of Tabernacles begins this Sept 28th in Jerusalem. That night the 4th and last of the blood moons will be visible IN ISRAEL on this, the first night of the feast. What is the Almighty saying to the earth?


Christian Celebration of the
Feast of Tabernacles 2015

“And I told them of the hand of my God which had been good upon me, and also of the king’s words that he had spoken to me. So they said, ‘Let us rise up and build.’ Then they set their hands to this good work”...Nehemiah 2:18

Nehemiah spearheaded the return of the Jewish people from the Babylonian exile to Israel, arriving in Jerusalem around 445 BCE. He not only displayed great courage and zeal but he was a determined leader and above all a man of God. The book named after him in the Bible records his accomplishments in rebuilding the fallen walls of Jerusalem and leading his people in spiritual renewal.

ICEJ has established the Nehemiah Award to annually honour outstanding biblical Christian Zionist figures at the Christian celebration of the Feast of Tabernacles each year.

This year’s Nehemiah Award is bestowed upon Drs. Jay and Meridel Rawlings in recognition of their lifetime record of excellence in promoting and defending Israel and in teaching the Word of God through a variety of media. John Victor (Jay) Rawlings has a PhD in Jewish-Christian Relations, while Meridel Rawlings holds a PhD in Psychology and Counselling.

In 1969, the Rawlings’ were drawn from their native Canada to Israel by a simple message: “If you love Me, love My people!” Their latest book, Love My People, is a historical memoir of their lives and launch into ministry in Israel. In obedience, the Rawlings set about producing documentaries telling Israel’s story, which over the past four decades have gained them a worldwide audience, from Jewish and Christian communities alike.

They produced Apples of Gold, an award-winning documentary on early Zionist history through the 1973 Yom Kippur War and into the 1980s, distributed even by Israel’s Foreign Ministry as an educational tool. The Rawlings’ laboured for twenty years to see the release of Soviet Jewry, producing the award-winning documentary Gates of Brass on the heroic refuseniks trapped behind the Iron Curtain who longed for Israel.

The Rawlings’ were involved in numerous television productions on Israel for the Trinity Broadcasting Network, 100 Huntley Street and the Miracle Channel in North America, and the EO Evangelical channel in Holland. In more recent years, they have produced programs for GOD-TV as well as for the Christian channels TV-7 in Finland, and Norge Visjon in Norway. Their programs have been dubbed into German for Bibel-TV, and into Chinese and Spanish for other outlets.

Jay and Meridel were among the core founders of the International Christian Embassy Jerusalem in September 1980. Jay was the media coordinator for the founding of the ICEJ. His films were used far and wide by the ICEJ, especially in the early years. They have stood with the ministry ever since. Through various media tools, the Rawlings’ have sought to educate people on the importance of Israel in the light of current events and biblical history.

Meridel has also been working in the field of battling child trafficking and sexual abuse for the past thirty-five years, to teach and give counsel on this growing social ill. She has published books, documentaries and seminar workbooks on the topic, such as Honor Thy Father? Exposing the Secret World of Incest.

The unique contributions of Jay and Meridel Rawlings in educating and mobilizing Christians to stand with Israel have been enormous. For forty years now, they have pursued one overarching mission – to use the media to bring honour to the Word of God and to bless His people Israel today. The ICEJ greatly admires and commends their dedication and excellence in this work.

Based on their lifetime of achievements in inspiring Christians to stand with Israel, the ICEJ hereby honours Jay and Meridel Rawlings with the Nehemiah Award for 2015.
Posted by Jerusalem Vistas~Israel Vision at 10/07/2015 07:24:00 PM No comments:

Israel's PM States the Facts~Israel Protects Holy Sites and Citizens of All Faiths From Terror
Posted by Jerusalem Vistas~Israel Vision at 10/06/2015 03:04:00 PM No comments: