Raised To Hate, To Embrace an Ideology of Death~This is Their Story by Pierre Rehov

The School District Said Prayer Was No Longer Allowed...

So, This Valedictorian Tore Up His "Approved" Graduation Speech and Improvised...

Write Up From the Video:

After the school district ruled that a prayer was no longer going to be performed at any school functions including graduation, which prayer was replaced with a moment of silence Valedictorian Roy Costner adds the Lords Prayer into his speech, with the crowed showing tons of support. Liberty High School Graduation 2013 @ Littlejohn~Roy B Costner Valedictorian address. Video was recorded by Brian Dismukes

A Young Man Slaughtered in Broad Daylight~Where is The Outrage?
Posted by Jerusalem Vistas~Israel Vision at 6/25/2013 11:30:00 PM No comments:

We Need to Watch This Until We Understand and Learn!

Sadly, This Message From Tarek Fatah is Ignored Until Today...Please Listen!
Posted by Jerusalem Vistas~Israel Vision at 6/25/2013 09:36:00 PM No comments:

The Repressive Islamist Culture~Christians Need To Pay Attention!
Posted by Jerusalem Vistas~Israel Vision at 6/25/2013 01:20:00 AM No comments:

Why Europe Has a Problem with Israel

In the video below, from Prager University, we hear from Daniel Gordis, President of the Shalem College in Jerusalem.  He zeroes in on the source of the problem in this fascinating look at the complex relationship between Europe, Israel and the Arab World.

There are many reasons why Europe and the rest of the world hate Israel and it is usually a combination or none of the commonly held reasons. This is an interesting theory, but sadly I fear it is only one of a plethora of reasons that Israel is constantly under fire. Whatever happened to Live and Let Live?


Why Europe Has A Problem With Israel

Some information on Prager University:
Dennis Prager claims it is possible to get the "education you missed" five minutes at a time.The website for Prager Universiy provides just that~educated talks only five minutes long. He covers a wide variety of topics and while you may not agree with all the opinions, you may just get a different point of view...

Prager University~Get The Education You Missed
Posted by Jerusalem Vistas~Israel Vision at 6/24/2013 10:12:00 PM No comments:

Which Side Will You Choose?

Radical Islam Targets Jews~Will You Become Like Them?
Posted by Jerusalem Vistas~Israel Vision at 6/20/2013 10:09:00 PM No comments:

Will Belgium Fall? Most Assuredly~Unless People Wake Up!!

Islamists Campaign for Muslim State~They're Sure They Will Win Elections...Believe It!
Posted by Jerusalem Vistas~Israel Vision at 6/18/2013 10:04:00 AM No comments:

The Pentagon Ordered This Removed ~ Guess Why?

Because The Repeated References (to GOD) Are So Offensive~God Created a 1st Sgt.
Posted by Jerusalem Vistas~Israel Vision at 6/11/2013 01:45:00 PM No comments:

Christians Wishing to Home School Need to Watch This...

Are the Governments Trying to Indoctrinate Our Children?

Want To Boycott Israel?? Some Things You Should Know... 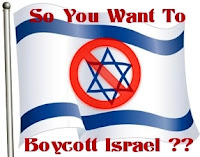 Those calling for boycotts have an agenda~and that is to destroy Israel~to wipe her off the map. One of the most vocal leaders (Omar Barghouti) was born in Qatar (one of the world's wealthiest states) grew up in Egypt and only moved to Ramallah, West Bank, as an adult. At the same time he is demonizing and calling for a Boycott of Israel, Barghouti is studying for his Masters Degree in philosophy at Tel Aviv University (that's in Israel).

The Boycott movement is nothing more than hate and anti-semitism, in the guise of "palestinian" rights. The joke is that under the "PA" governed areas, the Arabs (and they are Arabs) have almost no freedoms, and suffer greater human rights violations than almost anywhere in the world. Boycotting industry in Judea and Samaria will actually deprive PA Arabs of well paying jobs and the rights that go along with them. Here is just one example:

The Palestinians working at SodaStream receive full social and health services in accordance with Israeli law. This includes pension contributions and insurance. Labor law in Israel requires an employer to pay wages and contributions four times higher than those required by the Palestinian Authority. In addition, SodaStream also provides benefits that include daily hot meals, clothing, transportation and overtime pay up to 200% as required by Israeli law. ***See 2nd Video Below

Nobody ever questions why more people under the authority of the PA want to obtain Israeli citizenship than those who want to stay in the PA areas. That's because in Israel, they have better treatment, lives, jobs, housing and rights than in in other Arab country~this is doubly true for women or any who are free thinkers.

Check the facts and you will find out that Jews and Christians are being driven out of every Arab (Muslim) country. Churches, Synagogues (or any other religion than Islam) are forbidden and persecuted. Once majority Christian areas are now almost totally cleansed, either by eviction through persecution, or forceful conversions.

So, next time you see a brilliant advertisement and information stand on the horrors of Israel, make sure you think twice before falling for the "PA" PR.


Think Carefully About What The BDS Movement Wants You To Give Up...

There are uncountable movies and video clips available on the internet for viewing, ranging from boring facts to unbelievable conspiracy theories. One must pick and choose carefully.

Strangely, there are times when people painstakingly compile facts and the world refuses to see. This is particularly true when it comes to political correctness and multi-culturalism. When the facts reveal truths about Islam the result is often rage, threats, riots and barbaric murders.

Below is the full version of the movie Obsession. I am not sure how long it will be available, but I urge you to take the time to watch it. With events unfolding in the Middle East, Europe, Scandinavia, America and indeed all over the globe, we are facing a clear and present danger to western culture and freedom as we know it. Ignoring the truth will not save anyone.

This is not a Hollywood movie with special effects~This Is Real! Please, Watch and Learn!
Posted by Jerusalem Vistas~Israel Vision at 6/07/2013 10:00:00 PM No comments:

The Third Jihad~Must Be Watched!

This Film Exposes What The Media Will Not Tell You~Pay Attention!! 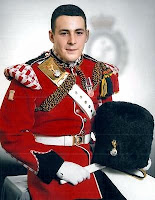 The horrific slaughter of Lee Rigby in broad daylight by two Muslims is shocking and should be a wake up call for everyone.

For anyone who is not aware, he was wearing a "Help for Heroes" t-shirt (in support of a charity that assists disabled military personnel) when the barbaric duo spotted him and ran him down with their vehicle. They then jumped out and proceeded to slash him to pieces with knives and cleavers. One of the killers then posed for the cameras and declared he was doing this in the name of his allah along with a lot of other rubbish. Lee Rigby was so badly mutilated he was almost decapitated and could only be identified by dental records.

One would think that common decency would dictate that those against military service would at least keep silent, but not so for Anjem Choudary.

This vile man is a licensed attorney, but refuses to work. He prefers to incite against the very country funding his easy lifestyle, while encouraging fellow muslims to collect welfare, or what he considers "Jihad Payments". He is well known for his hatred of anything "non-islamic" and proudly spouts his venom at every opportunity.

Choudary's free speech, lifestyle, welfare benefits ($38,000 plus per year) are all staunchly protected by the British "system". Meanwhile, the people of the UK are being attacked, raped, beaten, and in the case of Lee Rigby, brutally murdered in broad daylight.

England was once considered a great empire, but it has submitted and bowed down to Islamic threats in the name of multi-culti, political correctness. It is Not Multi-culturalism when you must surrender your own culture, bow like a dhimmi and revert to the barbaric seventh century customs dictated by islam.

Look around at any country where Muslims have immigrated. There is a pattern emerging, and it is not pleasant. Freedom of Religion, Freedom of Speech, Freedom of Any Kind is being squashed like a bug. The clock is ticking and we are nearly out of time...

If you have any doubts, just listen to this video...and remember, this is the man whose "rights" are staunchly protected! Unless you speak out now, for your faith and freedoms, they will be erased...

The Legal Foundation & Borders of Israel...

For everyone who takes an interest in issues concerning Jewish rights in the Land of Israel, and Jewish sovereignty, this is a name you should be aware of.

Howard Grief was born and educated in Canada. He then immigrated to Israel in 1989 and was admitted to the Israel Bar Association in 1991. In December of that same year he was formally appointed as legal adviser in International Law on matters pertaining to the Land of Israel by Yuval Ne'eman, Minister of Energy and Infrastructure in the Yitzhak Shamir Government.