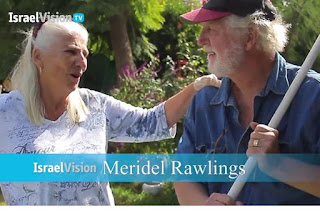 In Israel, during the latter part of every year the olive trees are laden with fruit. All over the country there are olives trees along the sides of the roads, on isolated patches of dirt, or in beautiful orchards.

When they ripen you will see people up in the trees with canvas bags over their shoulders picking the ripe fruit.

A more common way to gather the olives is to lay canvas or plastic sheets on the ground and "beat" the branches to bring the olives down.

Jay and Meridel Rawlings planted olive trees in their back yard many years ago. While olive trees take a long time to grow, they also can last for hundreds of years. As the trees have matured, the olives have become more and more plentiful and the harvest has turned into an annual event for the family.

Now, each year they harvest their small crop and take it to the Olive Press to be made into beautiful, pure, Israeli Olive Oil~how wonderful it is to enjoy the "fruits of our labours".


The LORD replied to them:
“I am sending you grain, new wine and Olive Oil, enough to satisfy you fully;
never again will I make you an object of scorn to the nations"...Joel 2:19 (NIV)

Join with the Rawlings this year, in their backyard as they celebrate life; and bring in the harvest during the last days of the year before the heavy rains begin!

Save the Christians: The Forgotten Refugees 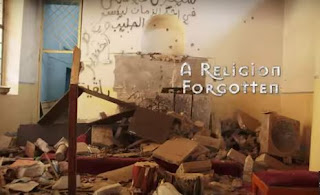 This film is a first access look into the lives of Iraqi Christians who, under threat of death from ISIS, were forced to flee their ancestral homeland.

While the international community has opened its doors to Syrian (muslim) refugees, it ignores the Christian genocide happening right before its eyes.

The few who make it to refugee camps, are targeted for violence. Those seeking a safe haven are routinely shunned by Western governments~just check the immigration figures. The suffering Christians of Iraq have nowhere left to run to.

Why is the world ignoring these refugees? Why are the Christians of the world remaining silent to their suffering at they same time they open churches to be used a mosques? Why?

Remember the often repeated statement: “First the Saturday People (Jews), then the Sunday People (Christians),” which means “first we kill the Jews, then we kill the Christians.” Take a good hard, honest look at the Middle East now. The Jews have already been driven out of every country except Israel and now the Christians are facing the same fate. The choices are convert or die. Those who still have the means and ability are trying to flee.

Even resettlement is being denied them now, as the muslim populations are rapidly growing across Europe and the west and the government elites seem to have chosen sides. Check the immigration records of each country and compare the numbers of muslim and Christians allowed in. There is an appalling lack of Christians.

1)  What will you do in the west when you are eventually faced with the choices (convert or die)?

2)  What are you prepared to do NOW to help your suffering Christian brothers and sisters?

To read more about the making of the move go to Rebel Media. Those of you interested in attending the movie screening can find all the information at Eventbrite.

Note: Facebook Refused To Allow an Ad for This Film~Tell Everyone to Go See It!
Posted by Jerusalem Vistas~Israel Vision at 1/25/2018 11:27:00 AM No comments: 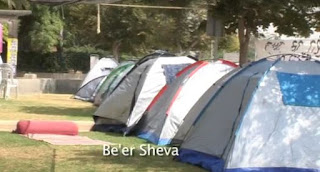 “Behold, I will bring them from the north country, and gather them from the ends of the earth.
Among them the blind and the lame, the woman with child and the one who labours with child together,A great throng shall return there. They shall come with weeping…”Jeremiah 31:8,9a.


In spite of her neighbours with their ongoing lies and continuous attacks, paradoxically, Israel IS Noah's Arc for Jews according to the Almighty. They began to return home in the 1880's. No nation wanted Jews. If you doubt this, do a little checking, (Canada included!) The situation only grew worse during WWII. Poor Jews returned to Biblical Zion with weeping weakened by disease and malnutrition just as the Prophets perceived and faithfully penned. This is what makes Israel absolutely unique! Oh, how we love to work to encourage any we meet, to come and take their rightful place here in history...this has always been an underlying goal of our original call, which sent us to Jewish Communities world wide.

Wanting now to focus on inside of Israel, we at Israel Vision are re-posting this production from the summer of 2011. Israelis of all ages were out in protest, locally known as the Tentifada, living in tents and trying to tell the government that they must keep their promises to their citizens. Did these protests bring significant change?

Israel is not a perfect country, but it is the only Democracy in the Middle East and our people for the most part remain steadfast and loyal. However, many people, young and old alike, have reached the breaking point. Today, in 2018 is again one of those times.

Anyone who has lived in Israel can attest to the fact that the rents and cost of living are extremely high, and wages are low. Compared to the USA, we pay 23% more in our "cost of living index".  At the same time, the wages are disgracefully low...so low in fact that a large sector of society can barely afford to rent the meanest of places. The idea of owning an apartment is now, "pie in the sky”, to say nothing of ever owning a house.

To buy a very small apartment will cost about 1.5 to 2 million shekels (between 4-5 hundred thousand dollars). The banks do not give mortgages easily. You must have at least 25% down, and an income of about 20,000 shekels per month, (US 6,000). The long and short of it is: most ordinary people barely earn above minimum wage of 5,000 shekels or US 1,500 dollars per month.

As for rentals, if you live around Jerusalem you will be lucky to find something for under 5,000 shekels (about $1,500) per month. In Israel you must also add property taxes (yes, the renter pays the taxes), building upkeep, and Insurance in addition to the on going monthly expenses of electricity, water, gas and phone/internet/cable. All this for a tiny place with no closets, cupboards, appliances and in most cases no light fixtures. Of course, there are always "good deals" but they are few and far in between and there will be dozens of people wanting them. No wonder people are up in arms. We are a hungry country with 1 in 3 children in Israel living in poverty. Can you believe that? Its a shocker!

So…in frustration and desperation people set up tents and protest. Today, almost seven years on we must ask, "are things any better?" To be honest, there have been improvements for the disabled which everyone is happy about, but the high cost of living~as in most countries~continues and more and more Israelis are falling through the cracks.

Revisiting Sderot on the Gaza Border

Yes, this is an old film, but, we are re-posting it for a reason. In recent weeks Iran has become even more antagonistic towards Israel. As a result, the ruling elite in the Gaza strip have begun to once again rear their heads with threats to annihilate the state of Israel.

When the IDF went into Gaza in 2009, Jay, David and Daniel drove to Sderot, a small town on the border of Gaza to see what the people were going through. They heard the explosions, spoke to the citizens and toured the spots where rockets had struck. The idea that citizens had "15 Seconds" to find shelter was sobering. How do you even teach young children to run for a bomb shelter??

During this time, Earl Cox, an international broadcaster and journalist was also in Sderot. He was there to support the people. One evening he even purchased pizzas and drinks for the soldiers of the IDF who were on active duty along the border.

Mr. Cox invited David Rawlings and the Mayor of Sderot to Washington. David was able to record the Mayor as he gave his thoughts on the situation in Israel and thanked the American people for their support.

Now, in 2018 as you watch this, please take note~time has indeed passed, but nothing has really changed~Israel's enemies continue to surround her and threaten the annihilation of the world's only Jewish State.

The UN Debate on Jerusalem~Why??

Why Is Israel The Only Country In The World Not Allowed to Decide It's Own Capital?
Posted by Jerusalem Vistas~Israel Vision at 1/06/2018 06:00:00 PM No comments:

Facts on Hevron That You Should Know 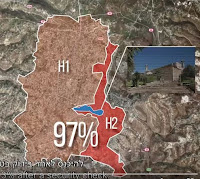 There are many, many stories about the city of Hevron. There are also claims of oppression and apartheid~that the arab citizens are starving and can hardly make a living because the Jews have closed their shops and all kinds of other horror stories.

Here is a short video that will give the clear facts. Please watch to the end and make note of the figures presented and the facts on the ground.

Israel has always wanted peace and prosperity for all of her citizens, whatever religion they are.

This can only happen if outside agitators stop interfering and spreading false stories. Perhaps, if people would let us resolve our own problems there could be a livable truce between those of us who actually live here.


Please Listen Carefully to the Whole Video~You May Be Surprised!
Posted by Jerusalem Vistas~Israel Vision at 1/03/2018 11:07:00 AM No comments:

We at Jerusalem Vistas / Israel Vision would like to wish
All of Our Readers, Friends and Family a
Very Happy, Healthy, and Successful New Year.

May the Blessings Continue to Flow Each and Every Day!