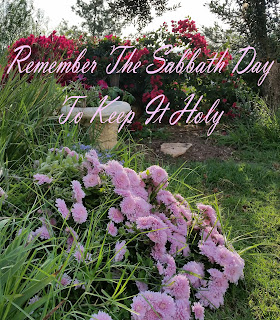 In keeping with the fourth commandment we are posting this on Friday afternoon (Jerusalem Time) just before the Sabbath (Shabbat) begins. Anyone who has not been to the Holy Land may not remember that our calendar is slightly different from the rest of the world.

The week in Israel starts Sunday and ends Thursday. Friday morning the stores are open for half the day to allow people to do their last minute preparations for Shabbat. In Jerusalem a siren is sounded to announce sundown and the beginning of the Sabbath.

Basically, everything in the country closes down. Until recent years, even the roads were free of vehicles. Sadly, except for religious areas, the holiness of the Sabbath is all but forgotten.

The Sabbath is from sundown on Friday to sundown on Saturday~a mere 24 hours, some of which are spent sleeping~and yet, there are many who can't (or won't) observe this one day of rest. One day to be with family and friends, stroll the quiet streets free of traffic and simply "be".  Sadly, these people have no idea of what they are giving up!

You have been set apart as holy to the your God, and he has chosen you
from all the nations of the earth to be his own special treasure...Deuteronomy 14:2 (NLT)


Setting aside a day of rest each week was a revolutionary concept when it was first introduced as the Fourth Commandment. But this Commandment does more: it extends that day of rest to slaves and animals and thus set in motion the slow process of ending slavery and the compassionate treatment of animals. The power of the Fourth Commandment to change your life is no less real today than it was for our ancient ancestors. Just ask the spouse of a workaholic how she would feel if her husband took off a day each week to spend with family and friends...Dennis Prager

This weekend, as you enter into your Sabbath~whether it is Saturday or Sunday~think about the real meaning of this fourth commandment and give yourself 24 hours of total rest from the world!

You can also view this Ten Commandments series at Prager University

The Ten Commandments~Introduction
~1~ Am the Lord Your God

Many of us, religious and secular alike, often look at the Ten Commandments without complete understanding. With all the translations and points of view available these days it is no small wonder that people become confused.

In this lesson on the "third statement" we see how easy it is for a simple sentence to be taken out of context or just plain misunderstood. Throughout this series the idea of "differing translations" is used to explain the difficulty in divining a clear message from the Bible.

Not all sins are equal. Some are worse than others. The worst of one of all? Committing evil in the name of God. This commandment is often misunderstood because it's mistranslated. It's not concerned with saying God's name "in vain" like "God, did I have a terrible day at the office." It's about using God's name in the commission of evil. We see this today when Islamists invoke God's name while they murder innocent people...Dennis Prager

You can also view this Ten Commandments series as well as many other lectures at Prager University.


The Third Statement: Do Not Misuse God's Name 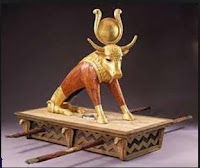 Continuing with the series on the Ten Commandments, we come to the second statement which deals with "Idol Worship".

Have you ever really thought about how this commandment resonates in our world today?

Today, the idea of idol worship feels ancient and remote to many people. Thus, the Second Commandment, "You shall have no other gods," doesn't seem applicable in modern society. But the opposite is true. We have more false gods than ever--art, education, fame, money, to name just a few. Over the past century the worship of false gods has led to massive evil; Communism and Nazism are just two examples. On a personal level, the worship of false gods leads to unhappiness...Dennis Prager

You can view the full Ten Commandment series as well as many other interesting courses at Prager University.

The Ten Commandments~Introduction
~1~ Am the Lord Your God

As stated in the Introduction to the Ten Commandments, we are proceeding with the first statement or "Commandment" that we were given three thousand years ago~I Am the Lord Your God...

Although the First Commandment ("I am the Lord your God") appears simple at first glance, it actually set into motion the most revolutionary idea in human history--ethical monotheism, the belief that there is one God whose main wish is that people treat each other decently...Dennis Prager

Dennis Prager goes on to explain that without this commandment, the following nine mean little. With it, the Ten Commandments become world-changing. You can also view the full Ten Commandments series as well as many other interesting course on a variety of topics at Prager University.

The Ten Commandments: An Introduction 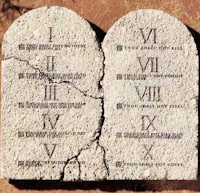 We are all familiar with the ten commandments, and perhaps we are also sure that we know the meaning behind each of them.

In a very interesting series, posted online some time ago, Dennis Prager explains how the Ten Commandments led to the creation of Western Civilization and why they remain relevant to our life today.

The series is so interesting that we decided to post a commandment (or statement) each day over the next two weeks, and we encourage you to relax and take five minutes to contemplate their real meaning, and how you can use these simple rules in your life.

Humanity has everything it needs to create a good world. We've had it for 3,000 years. It's the Ten Commandments; ten basic, yet profound instructions for how to lead a moral life. If everyone followed the Ten Commandments, we would not need armies or police; marriages and families would be stronger; truth would be a paramount value...Dennis Prager

This video introduces the ten-part series. You can also view the full Ten Commandments series at Prager University.


Introduction to The Ten Commandments

This Short Clip is From Iran~Is There Anyone Who Still Thinks They Will Keep the Peace??

This is What Israel's "Peace Partners" Are Doing to Promote "Peace"...Transcript Below


* Transcript and Video~With Thanks to PMW (Palestine Media Watch)

Iranian TV reporter:
Here is the first tunnel...When we met the Ribat [Islamic] fighters in this tunnel, they said that the weapons in their hands and their preparations for confrontation with the Israeli enemy are what give them reason to live.

Al-Aqsa Martyrs’ Brigades fighter:
This tunnel is approximately 3.5 km long and crosses the border between the Gaza Strip and the Zionist enemy. There are tunnels inside [Gaza] through which Jihad fighters pass during war...We spend all our time trying to get money to fulfill our duty concerning our occupied lands and liberate them from the Zionist entity. This is why we are asking [for money]...especially [from] Iran, which is a known long-time supporter of the resistance and the Palestinian cause..."

Iranian TV reporter:
The book of resistance is still open... and its last line will not be written until Palestine is liberated.

Notes:
Ribat~Religious conflict/war over land claimed to be Islamic

Nabil Mas'oud~A suicide terrorist from the Al-Aqsa Martyrs' Brigades (Fatah's military wing) who, along with Mahmoud Salem from the Izz A-Din Al-Qassam Brigades (Hamas' military wing), carried out a double suicide attack at the Ashdod port on March 14, 2004, killing 10 people and wounding 13. 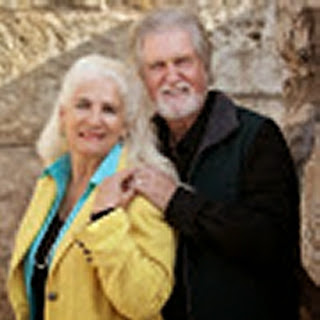 During the months of May, June and July, Jay and Meridel traveled with their son Daniel to Canada for a cross country Ministry Tour.

The tour began in Ottawa on 02-03 May. From there, they visited partners and friends in each province to bring their message.

It was a very grueling trip, but so rewarding as many, many people were there to greet them, encourage them and listen to their poignant message.

At the first stop in Ottawa, they took time to visit Capitol Hill. Here is a short clip that they filmed.