Is This the Face of the Saviour of Israel? 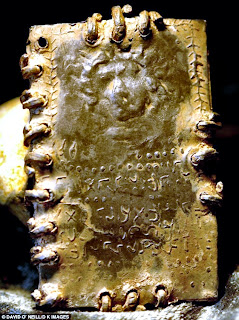 An extraordinary picture on a recently discovered hoard of  lead codices (booklets) found in a cave in the hills overlooking the Sea of Galilee (less than 100 miles from Qumran, where the Dead Sea Scrolls were discovered, and around 60 miles from Masada) could be the first-ever portrait of Jesus Christ--possibly created during the lifetime of those who knew him.
Before we get too excited I must point out that there are many who are already convinced they are fake--duplicates of Jordanian museum exhibits. If you go THIS LINK you can follow links to investigation and discussions with Dr. Margaret Barker, Co-founder of the Temple Studies Group, on the reasons many are doubtful.
This post is a summary of facts to date. It is thought that the codex showing what may be the face of Christ has not been opened yet. Some codices show signs of having been buried--although this could simply the result of lying in a cave for hundreds of years. According to the "holder" of these booklets, they were discovered five years ago after a flash flood washed away part of a hill to reveal what looked like a large capstone, which when pushed aside, revealed a cave containing a large number of small niches in the walls. Each niche contained a booklet. Other objects including metal plates and rolled lead scrolls were also found.

Many of the books were sealed on all sides with metal rings, suggesting they were not intended to be opened, possibly  because they contained holy words which should never be read. Early Jews fiercely protected the sacred name of God--only ever uttered by The High Priest in the Temple in Jerusalem at Yom Kippur. A sealed book containing sacred information was mentioned in the biblical Book of Revelation.
These amazing codices are about the size of a credit card. While the Dead Sea Scrolls are rolled pieces of parchment or papyrus containing the earliest known versions of books of the Hebrew Bible and other texts (the traditional Jewish format for written work) these lead discoveries are in book, or codex, form which has been associated with the rise of Christianity.
Each one has an average of eight or nine pages and appear to be cast rather than inscribed. There are images on both sides, and they are sealed with lead ring bindings. Severely corroded when they were first discovered, it has been possible to open them with care.
Unlike the Dead Sea Scrolls, these lead codices appear to consist of stylized pictures, rather than text, with a relatively small amount of script that appears to be in a Phoenician language, although the exact dialect is yet to be identified, which means it could take years of detailed scholarship to accurately interpret the codices.

If genuine, it is possible the books were created by an early Messianic sect, perhaps closely allied to the early Christian church and that these images represent Christ himself.

Another theory was put forward by Robert Feather--an authority on The Dead Sea Scrolls and author of The Mystery Of The Copper Scroll Of Qumran. He says it is possible that these books are connected to the Bar Kokhba Revolt (132-136CE), the third major rebellion by the Jews of Judea Province and the last of the Jewish-Roman Wars. The image may be that of Bar Kokhba himself. The followers of Simon Bar Kokhba, the commander of the revolt, acclaimed him as a Messiah, the heroic figure who could restore Israel.

The spiritual leader of the revolt was Rabbi Shimon Bar Yochai. Because of his rebellion against the Romans he was forced to hide in a cave for thirteen years, where he wrote a secret commentary on the Bible (the Zohar), which evolved into the teachings of Kabbalah, a mystical form of Judaism. Note, that the Kabbalah followed by the rich and famous is a modern day perversion and is not related to the original Kabbalists--no matter what those selling it might say. Feather is convinced that some of the text on the codices carry the name of Rabbi Bar Yochai.

It is reported that the books are in the possession of Hassan Saida, in Umm al-Ghanim, which is at the foot of Mount Tabor, west of the Sea of Galilee. Regarded as a wealthy man in his village, Saida owns and operates a haulage business. Saida, who is in his mid-30's, married, with five or six children, claims he inherited the booklets from his grandfather--and this is where the gray areas start...
There are claims that books were first shown to his Bedouin business partner by a villager in Jordan selling ancient artifacts. For generations the area in which they were found has been considered militarily sensitive and agriculturally poor--forcing the local people to supplemented their income by hoarding and selling archeological artefacts found in caves.The business partner was apparently shown two very small metal books which he brought over the border to Israel. Saida became entranced by them, coming to believe they had magical properties and that it was his fate to collect as many as he could.
More of the booklets were clandestinely smuggled across the border by drivers working for Saida--the smaller ones were hung on chains which the drivers wore around their necks as charms, and the larger items were concealed behind dashboards.

Saida allegedly went into partnership with a number of other people--including his lawyer from Haifa--in order to finance the purchase of the booklets. Saida’s motives are complex. While he constantly studies the booklets, he does not take particularly good care of them--opening some and coating them in olive oil in order to "preserve" them. Collectors of antiquities in both Israel and Europe have offerred Saida tens of millions of pounds for just a few of them, but he has declined to sell any.

When he first obtained the booklets, he had no idea what they were or even if they were genuine. In 2007 he contacted Sotheby’s in London in an attempt to find an expert opinion, but the auction house declined to handle them because their provenance was not known. Soon after, British author and journalist Nick Fielding was approached by a Palestinian woman who was concerned that the booklets would be sold on the black market. Fielding was asked to approach the British Museum, the Fitzwilliam Museum in Cambridge among other places. 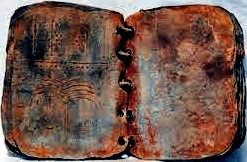 Fielding travelled to Israel and was able to obtain a letter from the Israeli Antiquities Authority saying it had no objection to their being taken abroad for analysis as they believed the booklets to be forgeries. None of the museums wanted to get involved because of concerns over provenance. Fielding was then asked to approach experts to find out what they were and if they were genuine.

David Feather, who is a metallurgist as well as an expert on the Dead Sea Scrolls, recommended submitting the samples for metal analysis at Oxford University. The work was carried out by Dr Peter Northover, head of the Materials Science-based Archaeology Group and a world expert on the analysis of ancient metal materials. The samples were then sent to the Swiss National Materials Laboratory at Dubendorf, Switzerland. The results show they were consistent with ancient (Roman) period lead production and that the metal was smelted from ore that originated in the Mediterranean. Dr Northover also said that corrosion on the books was unlikely to be modern.
Meanwhile, the politics surrounding the provenance of the books is intensifying. Most professional scholars are cautious pending further research and point to the ongoing forgery trial in Israel over the ancient limestone ossuary purporting to have housed the bones of James, brother of Jesus. The Israeli archeological establishment has sought to defuse problems of provenance by casting doubt on the authenticity of the codices, but Jordan says it will "exert all efforts at every level’ to get the relics repatriated". 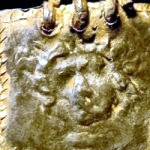 Are these booklets genuine? If so, do they represent the first known artefacts of the early Christian church or the first stirrings of mystical Kabbalah? There is no doubt that the debate will rage for years to come.

Rabbi Shimon bar Yochai never wrote a commentary on the ZOHAR but taught his insights to his students orally !!!

Many years later, his students slowly started writing down the teachings.

However, there is a huge controversy whether the ZOHAR really comes from Rabbi Shimon but was only published by Rabbi Moshe de Leon in 1290.