This is horrible and disgusting but not news to anyone living in the Middle East. In Arabic, the word for Black = Slave.
So why do western countries continue to funnel money into these countries to support the implementation of Sharia Law and the systematic murder / Ethnic Cleansing of anyone who is not an Arab Muslim?
Why are the receivers of western funds not expected to have the same racial and religious tolerance that they demand the rest of the world show to Islam?
Where are all the "Civil Rights" and "African American" groups? The silence is deafening...Would anyone out there care to offer an opinion???
* Hat Tip to Bare Naked Islam blog. 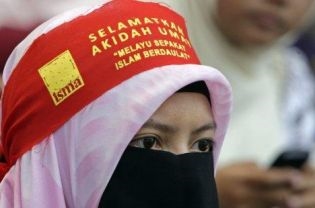 The "Arab Spring" cleared the way for the Muslim Brotherhood and Islamic rule.
Now Malaysia is feeling the pressure. A rally that is supposedly supported by 2,000 NGOs was held against "Christian Proselytizing".
While only 5,000 or so turned up, it is still a worrying trend. Look at the increased attacks on Christian Copts in Egypt these past months.
The entire Middle East is slowly being cleansed of Christians. Jewish populations are already negligible or non-existent. To display any signs of faith (unless it is Islam) could cost you your life in this part of the world. If you don't believe it, just try "openly" wearing a cross in a Muslim country~better still carry a bible to Saudi Arabia or hand out pamphlets outlining the tenets of Christianity...
There is only one exception~Israel! Yet, no matter where there is unrest you will see the burning of Israeli flags, calls for more ovens, and the tired signs "blaming the Jews" for all the ills of the world. Shocking enough, but it beggars belief to see useful idiots claiming to be Jews parading around calling Israel an apartheid state and much worse.
There seems to be a real communications failure in this world. Hopefully, people will wake up...Soon!
Posted by Jerusalem Vistas~Israel Vision at 10/24/2011 03:06:00 PM No comments:

Hijab-Wearing Cops in Toronto~What Next?

Do You Believe in the Bible?

Here are the facts~clearly laid out. Whether you follow the Bible, or choose simply to look at the legalities, Judea and Samaria are a part of Israel proper. Isn't it time to stop the madness?
Posted by Jerusalem Vistas~Israel Vision at 10/10/2011 11:58:00 AM No comments:

Nonie Darwish~Islam Should be 'Annihilated'