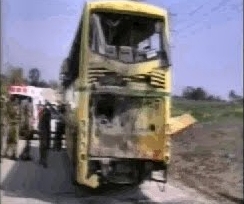 Just minutes ago we heard the rumbling sound of bombs and knew it was the IDF taking action.
Earlier, Anti-tank missiles were fired on a school bus outside Kibbutz Sa'ad in the Sha'ar Hanegev Region in Israel, critically wounding a 13 year old boy as well as the bus driver.
Thankfully they were the only ones on the bus at the time.
Paramedic Hanania Reich, told  Ynet about the attack: 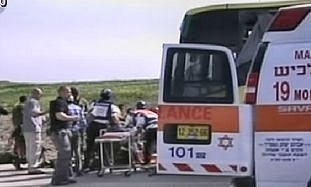 We were first to arrive together with soldiers. On the road lay a young victim, unconscious and bleeding. We began to resuscitate him and eventually MDA came and evacuated him by helicopter. The driver was hysterical. He had shrapnel in his leg, he was lightly injured--the front of the bus had also been hit.

Minister of Science & Technology Daniel Hershkowitz, on a visit in the south was rushed to a bomb shelter:


It's intolerable that, in a sovereign state, children are murdered and hurt every day. Israel must put an end to this and I will make sure the government of which I am a part makes the proper decision.