This past week, Israel has once again seen violence and death. Two young men died when a Hezbollah cell launched six anti-tank missiles towards the convoy they were in. Three of the missiles hit the unarmored vehicles and one hit a house in the nearby village of Ghajar.
The first missile was a direct hit which instantly killed Captain Yohai Kalangel, 25, and Sergeant Dor Nini, 20. Two others vehicles were damaged, and seven additional soldiers were wounded in the attack. The UN has reported the death of a Spanish Peace Keeper that occurred during the shelling that took place in the aftermath.
During the first funeral this afternoon on Mount Herzl in Jerusalem, the father of Yohai Kalengel stated:
"Where you should have buried me, I bury you."
There are no words to describe the pain of a parent who must bury a beloved child. There are no answers for the ongoing hatred. Israel, and the Jewish people as a whole are under attack~this is nothing new.
The thing that hath been, it is that which shall be; and that which is done is that which shall be done:
and there is no new thing under the sun...Ecclesiastes 1:9 (KJV)
Our only rest is in The Lord~He Alone Can Ease The Pain~We must Seek His Face...

Seek Thy Face
Seek Thy Face
Our lives are but a hands breadth wide,
We live as like the morning mist
Then set the world aside.
Early shall I seek you Lord
And late upon my bed
No rest for me or comfort shall I find
A place to rest my head.
Seek Thy Face
Seek Thy Face
That Still Small Voice
Is calling me.
Every day and evening
The living way your showing me.
I Seek Thy Face
I Seek Thy Face
Do not be timid and don't be shy
Look up and smile for He is Watching
My only answer
Here Am I
...Written 10 August 2002, by R.G. Fowler of Blessed Memory (Meridel's Younger Brother)
Posted by Jerusalem Vistas~Israel Vision at 1/29/2015 01:46:00 PM No comments:

Holocaust~After Seventy Years Have We Learned Anything?

So, one must ask,after seventy years have we learned anything at all? Are we doomed to repeat our mistakes over and over again?

Survivors of the Holocaust are slowly dying out. There are a mere handful of those who made it out of the camps to testify, while the deniers are gaining strength. Do a search on any film from the days of the Holocaust and you will find many more declaring them to be lies.

In Israel we have a concentration of survivors, who, for the most part live their lives outside the public eye. Some do speak out when approached, and some to this day refuse to come to terms with the disaster. In some families there is a combination, one who has learned to deal with it, and one who lives every single day in horror.

The Holocaust was very real. The meticulous records created by the Germans themselves have proven this beyond a doubt. The fact that the Jewish people survived, is a constant thorn in the side for the world in general. Perhaps, because as a collective they did nothing. It was left to tiny groups of people with a conscience and a sense of basic human decency to do what they could in the most difficult of situations. There are no end of stories about those who risked everything, just as there are endless tales of betrayal, thievery and cold blooded murder.

When the liberation came, many tried to return to their home countries, only to find that their homes had been "taken over" by their neighbours and they were not wanted. After years of abuse at the hands of the Germans, the Jewish people were once again placed in camps, or left to drift, with nothing but the few rags on their backs, until they could find a place, a new home to start over.


A new HBO documentary, Night Will Fall (26 January 2015), directed by André Singer and narrated by Helena Bonham Carter and Jasper Britton, tells the story of how, seventy years later, a lost documentary filmed by Alfred Hitchcock and shelved in the British archives, came back to life. As to why it was shelved in the first place, the LA Times offers a clue:

The British needed the German people to "pick up the pieces and help energize the destroyed Germany economy. They didn't want to demoralize the people further by rubbing in their guilt, and the 'German Concentration Camps Factual Survey' would not have helped restore confidence," Singer said.

There was also a concern, Singer added, that "it would provoke most sympathy for the Jewish refugees still in the camps after the war [who] wanted to go to Palestine. The British were having problems with nascent Zionism and felt the film would be unhelpful."

As for the question "After Seventy Years Have We Learned Anything?", one would sincerely hope so, but looking at what is happening in the world today, the inclination is to say, sadly, No.


Trailer for "Night Will Fall" 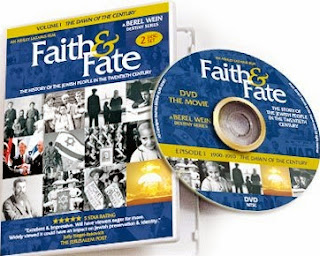 
Follow the Jewish People at the Dawn of the Century~Knowledge is Power!
Posted by Jerusalem Vistas~Israel Vision at 1/25/2015 11:28:00 AM No comments:

After the Terror Attacks on Charlie Hebdo & French Jews...

Have we not learned anything at all from the horrific attacks that just took place in France? When will the media and politicos admit that the gradual creep of "Islamism" is picking up speed, and with it the attacks on free speech, democracy and anything "non-muslim".

At one time it was easy to ignore attacks that took place in "3rd World" countries. People seemed to have an unspoken agreement that it was not "our" problem, here in the free world. As Muslim immigration picked up pace, the ever welcoming western world bent over backwards to welcome new citizens. After all, weren't most of us immigrants at one time?

Those who dared to express concerns, and warn of the dangers of large groups of people insisting on bringing 7th century laws into our countries, have been harassed, black-listed and now, slaughtered.

As the attacks on western society rise in number, why are the media and political spheres insisting that it has nothing to do with Islam?


The truth is, it has everything to do with Islam, and those followers who refuse to acknowledge that non-Muslims have rights as well. This is a fact that will not change unless Islam itself undergoes a reformation. Over the centuries peoples of all faiths have progressed as free, democratic societies have evolved. It is called "change", something which Islam avoids.


Rather than the leaders and opinion-makers of the free world uniting to demand that Muslims either cease their barbaric practices or go back to where they came from, we hear the same tired, "multi-culti, politically correct" lines..."It's Islamophobia!" and more recently, "We Fear A Back-lash Against Innocent Muslims!"...over and over again, ad nauseum...


Wake Up People! The middle-east mind-set is not the same as that of the rest of the world. All the pandering means to them is "weakness". That's right~weakness! It is a sign that they are winning and forcing us to submit to their primitive objectives. Make no mistake, these are people who do not value life, rather, for them, the greatest achievement is death~preferably while killing as many "kafirs" as possible.


All the whining and crying about "backlash" is just another part of their "jihad" to conquer and subdue the free world. This is from an article by Daniel Greenfield~well worth reading the entire article:

They are the perpetrators.

The sooner we face reality and accept that there is a real and present danger, the sooner we can unite to defeat this evil and send it back to where it came from. If we continue in this way, we are bound for dire consequences.

Then they will call on me, but I will not answer;
They will seek me diligently, but they will not find me.

Because they hated knowledge And did not choose the fear of the Lord,

They would have none of my counsel And despised my every rebuke.

Michael Coren and Tarek Fatah State the Hard Truth~Is Anyone Listening?
Posted by Jerusalem Vistas~Israel Vision at 1/13/2015 11:32:00 AM No comments:

Religion IS Critical for the Functioning of Democracy

Clay Christensen Explains Why Religion Is Vital For A Democratic Society

* Clayton M. Christensen is a Professor at Harvard Business School
Posted by Jerusalem Vistas~Israel Vision at 1/12/2015 01:43:00 PM No comments: