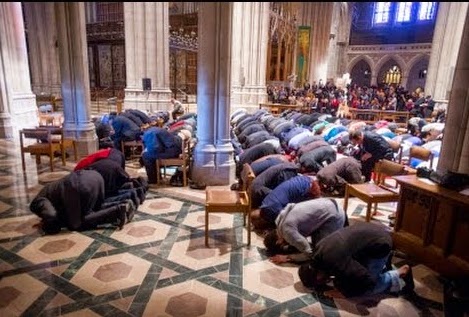 This past Friday, a Muslim prayer service was held (for the first time ever) in the National Cathedral in Washington, DC.

The date, 14 November 2014, is significant to the Muslim world in that it marks the 100th anniversary of the last declaration of holy war, or jihad, by an Ottoman “caliph”.

Can anyone tell me why they would allow a Muslim prayer service to be held on "this day" in "this cathedral"?? And while we are at it, why would anyone remain silent as women and "non-muslims" are relegated to the "back of the room".

Where are all the Christian leaders and representatives~or lay people for that matter? Strangely silent~or so it seems~except for one brave woman who dared to speak out. She told the gathering: 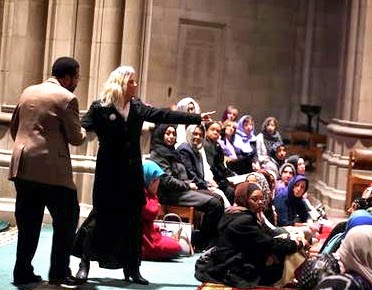 Jesus Christ died on that cross over there. He is the reason why we are to worship only him. Jesus Christ is our lord and savior!

We have built, and allowed you here in mosques across this country, Why can’t you worship in your mosque, and leave our churches alone?

Of course she was immediately removed from the premises.

What is so outrageous is that she was the "only" Christian to object to a Church being used by Muslims, who Do Not believe Jesus is the Son of God. This stunning silence, as Islam moves to repeat the past and conquer Christianity is shocking. Can it be that she is the only Christian in DC who takes her faith seriously? The fact is, that...

...by allowing Islamic prayer services on its premises, the church has become a mosque in the eyes of Muslims. It is now the property of the Ummah, held in trust by the waqf board, and will presumably be officially claimed by Islam when the time is ripe...
Franklin Graham, the son of Billy Graham was quoted as saying the following:

It’s sad to see a church open its doors to the worship of anything other than the One True God of the Bible who sent His Son, the Lord Jesus Christ, to earth to save us from our sins...

You can read about it at Tundra Tabloids. For more details on this story, including a translation on some of the prayers go to Gates of Vienna~15 November, and you can also go to a follow-up article by Gates of Vienna~16 November. Christians should be educating themselves about the reasons and meanings behind such events. It is time to understand that not everyone in this world acts with "brotherly love" and "good will" toward others.

This ongoing pandering by the Christian community towards Muslims can only end badly~for Christians.

Christians ARE The World's Most Persecuted Minority 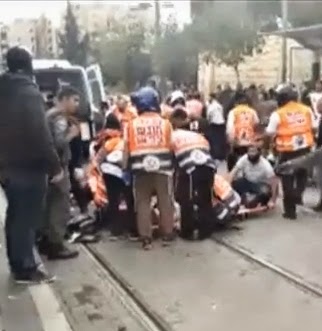 On 22 October 2014, we posted about the tragic death of three month old Chaya Zissel Braun in a terror attack. She was in her stroller. Her parents were returning from the Kotel when the terrorist with Hamas affiliations deliberately drove his car down the narrow passageway between the light rail stop and the tram itself. People had no escape. Baby Chaya's stroller was hit full on throwing her into the air. She died several hours later.

Once again, a Hamas affiliated Arab has mowed down innocent people. According to police spokesman Micky Rosenfeld, the rampage began at the Shimon Hatsadik light rail stop outside of Sheikh Jarrah  at 12:30 pm:

The terrorist hit four people, killing a border police officer...He then drove 500 meters up the road to the intersection (where a separate terrorist attack took place over the summer), hitting 10 others.

The terrorist then fled the van and attempted to attack innocent men, women and children with a crow bar, but was shot and killed by a police officer. Fourteen victims were rushed to area hospitals for treatment. 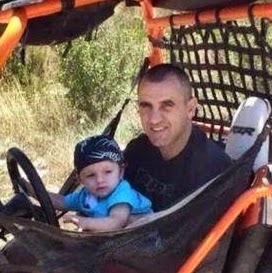 Jidan Assad, 38, from the Druze village of Beit Jaan died in the attack. The world press has been reporting (once again) that Israeli police shot an "innocent palestinian" after a vehicle accident.

The video below shows the aftermath~Note that the "innocent" driver was driving on the tram tracks where only the trams travel.

As with baby Chaya, this was a deliberate murder. As is usual the world ignores the facts and concentrates on ways to vilify Israel. To say that Israel is to blame is "stuyot"~a loose translation for stupid. The PA and Hamas have waged a media campaign for years and the world has fallen for it. They smell success and the more Israel is blamed and pressured, the more frequent and vicious are the terror attacks. These are people who only understand fear and power. They are now increasing the terror because they truly believe that the world is going to help them destroy Israel.

If you think this is "not your problem"~Remember~as it goes for Israel, so will it go for the rest of the free world. It is past time to stop the politically correct pandering...


One Dead~14 Injured in Hamas Affiliated Terrorist Attack in Jerusalem
Posted by Jerusalem Vistas~Israel Vision at 11/06/2014 11:28:00 AM No comments: