Christianity Is Under Attack~Who is Defending Christians?

"Reverse Crusade" Underway in the Middle-East~From Rome to America There is Silence!
Posted by Jerusalem Vistas~Israel Vision at 7/28/2014 06:26:00 PM No comments:

Jay Reports on "An Exercise in Reconciliation" Between Jews and Arabs...

The Case For Israel~Listen and Then Judge...

We have seen four Jewish teens and one Arab teen laid to rest. There was no reason for any of these children to die!

Nineteen year old Shelly Dadon~while on her way to a job interview~was strangled by the Arab cab driver who picked her up. Sadly, the idea that it was a nationalistic murder was hushed up. The world and even our own press barely mentioned it~even when the Arab admitted his crime.

Three boys; Eyal Yifrach~aged nineteen, Gilad Shaar~aged sixteen, and Naftalie Frenkel~aged sixteen were kidnapped while on their way home from school~then shot and dumped in a shallow grave in a field.

The world witnessed the vile "three-finger salute" from the Arabs, and responded that it really was the fault of the victims. Arab members in our own Israeli Knesset claimed the terrorists who did this were justified. Our "peace partners" danced and handed out candy in the streets.

Most recent, the kidnapping and murder of an Arab teen, Mohammed Abu Khdeir has shocked all of Israel. Condolences were sent to the family from politicians to the father of one of the murdered Jewish boys. Israelis as a whole have spoken loudly against this act. That this could be perpetrated by Jews is a shameful sore for the entire country. This is not our way. The security forces worked quickly and made arrests. The government promises the harshest punishment for this heinous crime.

But, this is not good enough. You see, when an Arab is murdered it is an international crisis~when it is Jews that are murdered...not so much. The victims were all teens, all innocent, but look at the complete opposite reactions from each side...

Jews cried, prayed and hugged each other as they laid their children to rest. When young Mohammed was murdered Israelis were outraged and demanded the perpetrators be brought to justice. There was no distinction made that he was or was not a Jew~He was an innocent and that's what mattered.

The Arabs, on the other hand, after celebrating the deaths of Jewish children, have been on a rioting rampage with no signs of letting up. Once again we are being bombarded with hundreds of rockets and children are faced with spending the summer in bomb shelters. Every day there are riots, roads blocked with burning tires, rocks (which are intended to kill) are thrown, Jews pulled from their vehicles and beaten, Joseph's Tomb has been firebombed again. Hamas declares they will wipe us off the map and "moderate" Mahmoud Abbas's Fatah faction is telling us we should get the body bags ready.

As the IDF prepares for what is inevitable, we can only pray~pray that those in charge can find a way to stop the violence; pray the enemy will decide to try negotiations instead of bombs.

Failing that, we pray for the safety of the boys and girls in the IDF who will be facing an enemy that screams for their blood. Pray for their safety as they go into battle knowing that they are expected to "hold back" and be "more humane" than those they will be facing. Pray for Messiah to come and stop the killing on all sides~Too Many Have Died.


Hu Yivarech~Prayer for the Soldiers of the Israel Defence Forces

For Those Who Wish to Pray...
Prayer for the IDF
He Who blessed our forefathers Abraham, Isaac and Jacob~
May He bless the fighters of the Israel Defense Forces, who stand guard over our land and the cities of our God, from the border of the Lebanon to the desert of Egypt, and from the Great Sea unto the approach of the Aravah, on the land, in the air, and on the sea.

May the Almighty cause the enemies who rise up against us to be struck down before them.
May the Holy One, Blessed is He, preserve and rescue our fighters from every trouble and distress and from every plague and illness, and may He send blessing and success in their every endeavor.

May He lead our enemies under our soldiers’ sway and may He grant them salvation and crown them with victory.
And may there be fulfilled for them the verse:
For it is the Lord your God, Who goes with you to battle your enemies for you to save you. 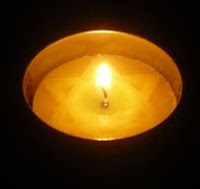 I want to live.

Not die a little every day,
From Hoplessness, the worlds way.

And everywhere just now,
The brightest  mind to bend and bow,
To suppose what if somehow,

Our time is running out.
Desperate steps to get us out.

A loving Father's comfort near,
Whisper gently in our ear 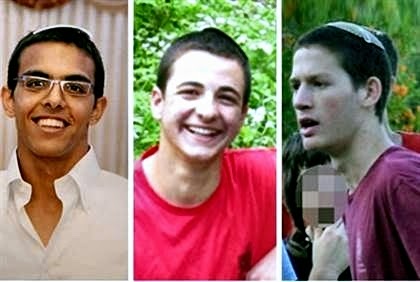 Earlier this evening the IDF announced that the bodies of Eyal Yifrach~19, Gilad Shaar~16 and Naftali Frenkel~16 were found in a shallow grave near Hevron.

It has been reported that the bodies were bound together, shot, and "not in good condition".

Now, at a time when all Israel is in mourning, the rest of the world is worried about the "poor palesinians" and urging Israel not to retaliate.

Hamas, as usual is taunting and threatening, while the mothers of the murderering terrorists have stated how proud they are. The media has been filled with pictures of the vile "three-finger salute", sweets and candies are handed out in celebration, and on 24 July, UN Human Rights Council, Geneva heard speaker after speaker condemning Israel and calling for sanctions to stop them from searching for the boys.

As a final touch, the ambulance that was removing the bodies of the three youths was attacked by arabs and the windows smashed. You really can't make this stuff up!

How depraved must the minds of these people be? There are really no words...

Three teens on their way home from school, not soldiers, not settlers, just three happy kids from loving families, brutally slaughtered for one reason~they were Jews.