Israelis Believe in the Power of Good and They Hope for a Better Life for Everyone
Posted by Jerusalem Vistas~Israel Vision at 3/31/2014 02:49:00 PM No comments:

Now There is Hard Evidence Treblinka's Gas Chambers Were a Reality
Posted by Jerusalem Vistas~Israel Vision at 3/30/2014 07:42:00 PM No comments:

About Faith and the Limits One Young Man Will Go To in Order to Defend His Belief in God
Posted by Jerusalem Vistas~Israel Vision at 3/25/2014 10:31:00 PM No comments:

You Must Watch Very Carefully~The Entire Free World Should Be Very Afraid!
Posted by Jerusalem Vistas~Israel Vision at 3/25/2014 10:45:00 AM No comments:

In the early hours of Wednesday, 05 March 2014, the IDF intercepted an Iranian shipment of advanced weaponry intended for terrorist organizations operating in the Gaza Strip. The boarding took place in international waters about 1,000 miles (1,600 kilometers) off the coast of Eilat, Israel, between Sudan and Eritrea in the Red Sea.

When the the KLOS-C with its dangerous cargo was escorted to port in Eilat, Jay and Meridel were onsite. Watch their video below as they give you a first hand report.

Following Jay and Meridel's report is the official explanation of the route the ship took (taken from the IDF Blog). The final video is actual footage from the IDF as they boarded the vessel and exposed the numerous advanced weapons destined for terror organizations to use against Israel.

The IDF found 40 M-302 rockets, with a range of between 90 to 160 kilometers (capable of reaching any point in Israel, including major population centers Tel Aviv and Jerusalem.), hidden in crates. They also found 180 millimeter mortar rounds, and some 400,000 7.62 millimeter caliber bullets.

The operation was the result of months of planning and intelligence gathering. The IDF works continuously to protect Israel. Time after time, as a result of their efforts, attacks are prevented thus preventing threats to civilians in Israel and abroad. Please Pray for Israel and Those who Defend Her.

The Route of the Iranian Weapons Shipment Explained

IDF Boarding the Vessel and Uncovering the "Cargo" of Weapons
Posted by Jerusalem Vistas~Israel Vision at 3/24/2014 08:13:00 PM No comments:

Proof That Success Does Not Require Nudity and Vulgarity

Over the years there has been a shift in what we know as entertainment. More and more performers have shunned the training and hard work required to develop talent and concentrate on becoming "overnight" sensations.

Now, the majority of "performers" make their claim to fame by stripping off, behaving outrageously and creating a spectacle. Reality TV has made those with no talent into "stars" who are paid unreasonable sums for doing absolutely nothing of value.

How can this be? Nudity, obscene gyrations and lewd behaviour~both on, and off the screen have created a culture of vulgarity. Children not yet in their teens are imitating singers who bare all and mimic an assortment of sexual acts. Anything goes~the more shocking the better!

How many aspiring performers compromise themselves for fame? How many "good kids" have been lost because they are convinced there is "only one way" to be successful? Where will it end?

Those of us who are believers and strive to maintain some sense of moral standards know this is not the way. Time and again we can see proof that real talent and hard work (and keeping your clothes on) can lead to success. The videos below are only two examples, and for those who care to look, there are many more. In these days where it seems as if the world has turned upside down, it is a relief to see that there is still some normalcy left.

The first clip is from The Voice~Italy. A young, energetic nun brings down the house with her performance. When you watch, do turn on the captions and listen to the judges comments. I think the men are totally taken aback, and one looks downright emotional. One of the judges asks Sister Cristina Scuccia what the Vatican thought of her appearing on the program. Without hesitating, the sister responds:

"He (the pope) always says we should go out and evangelize.
Telling of God doesn't take anything away from us, but will give us more. I am here for this"

Notice how the audience reacts~rather than being shunned for her faith, she is wildly cheered!
The second video many of you may have already seen, but it is so very inspiring. Two teens aged fifteen and sixteen, one very shy and introverted because of his appearance, sing their way to the finals with talent, hard work, and placing their friendship above possible advancement.

The world needs more good, honest people to step forward and take center stage. Whether it be music, acting, business or in everyday life, people need to speak out and be heard, so that the next generation will see that the real way to true success involves self-respect and hard work~not stripping off. We can't all be "stars" on center stage, but we can be successful in our daily lives and go from strength to strength by trusting in God's Word.

Only Sixteen and Seventeen Years Old~Johathan and Charlotte are Amazing!
Posted by Jerusalem Vistas~Israel Vision at 3/24/2014 01:58:00 AM No comments:

This Weeks Torah Presentation~A Word From the Rabbi

Confessions of a Passionate Moderate with Rabbi Hanan Schlesinger
Posted by Jerusalem Vistas~Israel Vision at 3/23/2014 12:54:00 PM No comments:

Beit El Residents Declare~Protect Us Or We'll Do it Ourselves

Note That the Attackers are From the UNRWA School! The UN Does Support Arab Terror!
Posted by Jerusalem Vistas~Israel Vision at 3/19/2014 01:18:00 PM No comments:

Shalom Everyone and Hag Purim Sameach from the Rawlings!!

Actually we are commanded to celebrate on this holiday of Purim also known as the Feast of Esther. It is always lots of fun in Israel. We dress up in crazy costumes, or Biblical ones, give charity to those in need, send gifts of food from house to house, celebrate our continual deliverance from evil and read the 'scroll' of Esther.

True to character, over the last three days, Hamas' terrorists in Gaza have lobbed over one hundred (100) rockets into southern Israeli centers of nearly one million citizens or 1/7th of our entire population! These neighbors fueled by "ancient hatreds" work to annihilate us. They are as determined today as they were in Queen Esther’s day. No one has been killed so far and we rejoice as instructed so long ago.

Just think, 2500 years ago, God chose a beautiful young Jewish woman, Esther, to save her own people all over the known world 127 nations states at the time. Calling her people and servants to pray and fast on nothing for 3 days the Lord began to work miracles. Her uncle Mordecai reminded her that "she had been brought to the kingdom for such a time as this."

She was to appeal to her husband, the King, with her petitions first. She uttered those famous words, "If I perish I perish!" Bravely she approached the King in his throne room and requested his presence at her banquet. It was during the meal that, she brought her case before him. Haman, the monster anti-Semite, was also present. Bravely she pleaded for Haman's letters of "death to the Jews" to be rescinded. The rest is history...we remember and celebrate our preservation as a people.

"And Mordecai wrote these things and sent letters to all the Jews"...Esther 9:20a

"...to establish among them as the days on, which the Jews had rest from their enemies,
as the month which was turned from sorrow to joy for them, and from mourning to a holiday;
that they should make them days of feasting and joy,
of sending presents to one another and gifts to the poor.
So the Jews accepted the custom"...v. 22, 23a.

"These days should be remembered and kept throughout every generation,
every family, every province, and every city,
that these days of Purim should not fail to be observed among the Jews,
and that the memory of them should not perish among their descendants"...v.28

So, please join us in celebrating the victory of our survival with a cup of tea, coffee or a glass of wine along with some "Haman's Ears" (triangle-shaped cookies filled with dates or chocolate). 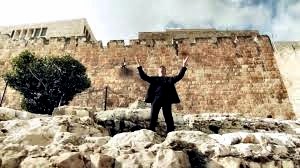 For over two thousand years the Jewish people have dreamed of returning from exile to Jerusalem. When the state of Israel was born, Jews all over the world realized that their dreams and prayers were finally being answered and the aliyah (going up) began.

The video below is a joyful song telling of Jews from around the world making their return to Jerusalem. Verse one depicts the aliyah from Yemen, verse two tells of the Jews coming from Iraq and Morocco, while verse three describes the mass return from the former USSR and Ethiopia.


"And to Jerusalem, Your city, may You return in compassion,
and may You rest within it, as You have spoken"


The above verse is taken from the daily prayers of the Jewish people, which contain numerous references to Jerusalem. This line is from the Amidah (Standing Prayer), which is recited three times on weekdays, and must be said facing towards Jerusalem. The full verse reads:

"And to Jerusalem, Your city, may You return in compassion, and may You rest within it, as You have spoke. May You rebuild it soon in our days as an eternal structure, and may You speedily establish the throne of King David within it. Blessed are You, Gd, the builder of Jerusalem...May our eyes behold Your return to Zion in compassion. Blessed are you Gd, who restores His presence to Zion".

My Heart is Dancing in Jerusalem (Yerushalayim) by Sam Glaser

The Ultimate Response to BDS~Worth Watching!

Brother Rashid is a Charismatic and Popular Moroccan Christian Television Preacher
Posted by Jerusalem Vistas~Israel Vision at 3/10/2014 11:14:00 AM No comments:

Prime Minister Benjamin Netanyahu Touches All The Bases in This Speech
Posted by Jerusalem Vistas~Israel Vision at 3/05/2014 07:07:00 PM 1 comment: