The Truth About the Balance of Power in the Middle East

In the past months we have posted the series "The Ten Commandments" (See Below for Links). Today we give you the final, and only "thought" commandment of "Do Not Covet".

Of all the 613 commandments, and in fact the entire Bible, this is the only one that regulates thought! The reason for this commandment is that when one holds "thoughts of coveting" this will almost always lead to the breaking others. Why is this so?

According to the Hebrew, coveting refers to "wanting to the point of seeking to take away and own" what belongs to another person. It is this type of "coveting thought" that leads to commission of more serious crimes.

There is only one Commandment that prohibits a thought, and it is this: "Do not covet." Why does the Bible, which is preoccupied with behavior, legislate a thought? Because to covet, to want what belongs to someone else, is the root of the preceding four commandments and often leads to evil. Before someone murders, steals, lies, or commits adultery, the desire to take what is rightly someone else's~coveting usually comes first...Dennis Prager

We hope you have enjoyed listening to the Ten Commandments. In these fast moving times, while many lament the number of bad things that appear on the internet, we hope this thought-provoking series will provide one example of how the "Word of the Lord" can be shared around the world.

~ 9~ Do Not Bear False Witness

Truth Telling~is it really that hard to tell the truth? I'm referring to every day, all the time~not just in a court of law.

How many times have we told "little white lies" and justified them? Do we even think about these types of lies as breaking a commandment? Do we consider that "always" telling the truth is what it is all about?

The most important ingredient to building a moral society is truth, both inside and outside a courtroom. The prohibition against "bearing false witness" does not only demand that truth reigns supreme in a trial, but that it is a societal value throughout the culture. Bad things happen when people believe lies. With truth, we can build a decent society. Without it, even the other nine commandments won't help...Dennis Prager 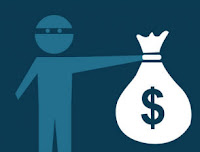 With all the bad things going on in the world, this is a good time to re-visit the Word of the Lord!

The eighth commandment, "Do Not Steal" covers far more than just taking a sweet from the candy store. There are many types of stealing~all of which cause damage. For those of you who have ever had their home burgled, you will probably never forget the feelings of violation. What about the other types of stealing? How do we recover from that? Do we ever truly get over it?

As we listen to this short lesson, think about this single commandment, and consider the good that obeying it could create in this world...

Murderous Hatred Towards Israel~Watch and Learn 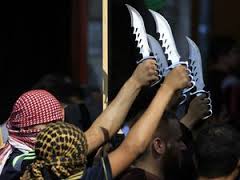 It is stunning how wrong the news from North America and Europe is when portraying the situation in Israel. Rather than promoting peace, they are throwing gasoline on the fires of hatred.

Please watch the clip below, taken from Palestinian TV. This is only a sample of what is shown day in and day out...and do be sure to read the sub-titles.

Apart from the fact that the Arabs are fed lies from birth, they are raised to act murderously for the sake of those lies. They are now being told that Mary and Jesus were Palestinian, and if you watch the clip below you will hear the claim that the Church of the Holy Sepulchre is also theirs. What do Muslims do to churches? They turn them into Mosques or destroy them.

As you watch the clip, remember, this is a culture that will never be satisfied with one piece of land. They want it all, and they want Islam to be the only law in the entire world. Eventually, this will be on your doorstep.

The following is a collection of MEMRI TV clips showcasing the recent wave of Palestinian incitement against Israelis and Jews as part of the "Knife Intifada." The compilation includes statements from Palestinian officials and religious figures, as well as segments from TV shows and videos posted on social media.

This is What Israel Has to Deal With~What Would You Do?
The Knife Intifada from MEMRI TV on Vimeo 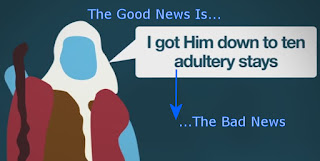 The last five commandments deal with how we must treat other human beings. We are familiar with the saying~treat others as you would treat yourself, but that does not always include the rules that God set down for us in the Ten Commandments.

Why do the Ten Commandments single out adultery as particularly harmful? Because adultery can destroy the foundational unit of a society~the family. If exposed, adultery leads to a sense of betrayal. If hidden, it forces the offending spouse to lie. Children are often the unintended victims. This may be one of the most difficult Biblical laws to follow, but it's also one of the most important...Dennis Prager

In the below video, we see a simple and easy to understand meaning behind the Seventh Commandment. In these days of free-thinking and acceptance of loose moral values, this commandment strives to protect the core of our civilization~The Family.


~7~ Do Not Commit Adultery