WARNING: THE PHOTOS ARE EXTREMELY GRAPHIC
Arab terrorists murdered five members of the Fogel family in the town of Itamar, north of Jerusalem, on Friday, March 11, 2011. Friday is Shabbat when Jews cease all forms of work and families pray, eat and sing together. A group of youngsters was having a Sabbath evening party at the Fogel house, and at 22:20 they left, along with the Fogel’s 12-year-old daughter, for an activity at the local Bnei Akiva youth group.
Between 22:20 and 22:30 the terrorists entered the house through the living room picture window, did not notice the 6-year-old boy sleeping on the couch and continued on to the bedroom where they slashed the throats of the father and newborn baby who were sleeping there. The mother came out of the bathroom and was stabbed on its threshold. The evidence shows that she tried to fight the terrorists.
They then slashed the throat of the 11-year old-son who was reading in bed. They did not notice the 2-year old asleep in his bed, but murdered the 3-year old with stabs to his heart. After that, they locked the door, exited through the window.
Exactly two hours after the infiltration, there was another warning signal from the same spot on the fence, as the terrorists left the way they had come.  Once again, the patrol did not identify the source of the signal as infiltration.
The 12-year-old daughter returned home at 00:30 and found the door locked. She asked a neighbor, Rabbi Yaakov Cohen, of the Itamar Yeshiva, to help her. He brought a weapon with him once he noticed tracks and mud near the house. The two woke up the 6-year old sleeping in the living room by calling through the window and when he opened the door, the Rabbi returned to his home.
When she entered the bedrooms, the young daughter saw the horrific bloodsoaked scene and ran out of the house screaming. The neighbor ran back and fired several shots in the air to alert security personnel.
The photos were released by the family. They have given full permission for their use in order to report on the horrific reality of murdering children and babies in their sleep, "simply because they are Jewish." 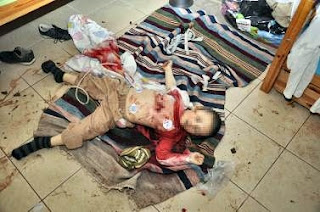 This week people all around the world are boycotting, protesting and screaming that Israel is an "Apartheid State". Yet, when Jews are murdered there is silence. Imagine the outcry if a Jew had gone into Gaza and carried out such a grizzly act! But Israelis DO NOT do this. Our Soldiers Only Retaliate when rockets are fired at our civilians--but they target terror groups and bomb factories~Not 3 month old babies!
To every one of you who are out there screaming "Apartheid" Shame on You! Shame on You All! Your uninformed screeching has emboldened and empowered terrorists. The blood of this family is on your hands just as sure as the ones who wielded the knives.

Oh Yes, and the "poor Palestinians" everyone is protesting for--they celebrated and handed out sweets in the streets when they heard of the murders.
Posted by Jerusalem Vistas~Israel Vision at 3/13/2011 12:13:00 PM