Israel Apartheid Week is upon us, and once again the only democracy in the Middle-East (that would be Israel) is being vilified. We at Israel Vision have felt the effects of the anti-Israel movement. 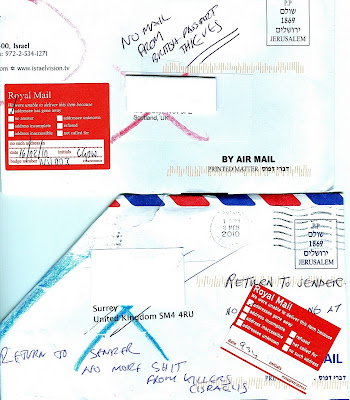 More and more we receive letters that are "returned to sender" with less than friendly remarks. Here are just two examples. In both cases the box checked says "Addressee has gone away". It is possible the "messages" came from someone at the Royal Mail. In the second letter one can clearly see that the red sticker was put on top of the hand written Return to Sender, then below in a different ink is written a very ugly message. My apologies for the language, but this is what we received.
The first claim that we are British Passport Thieves is almost comical, considering Six British SAS soldiers were arrested in Libya this week, carrying passports from several different countries--Oh My!

Dubai police accused Israel of using fake passports in the death of Hamas murderer and weapons smuggler, Mahmoud al-Mabhouh. To date there has never been proof that Israel was involved. Both Hamas and Dubai police have said that Mabhouh had enemies across the Middle East, any of whom would have had a motive for his murder. It has even been said that the PA was involved. But it is much easier to accuse Israel. In reality, anyone who thinks that the Secret Services of any country in this world do not use fake passports is living in fairyland.
The second letter is more disturbing. I somehow doubt the message writer has ever been to Israel or know of the contributions Israelis have made and continue to make to the world. I will also guess they have never experienced a suicide bombing in a busy cafe or on a full bus. 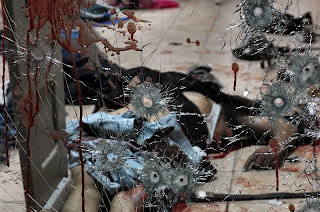 Do those who write hateful messages know that this week Israel marked the third Yartzeit of 8 young boys murdered in cold blood while studying Torah? They were aged 15 to 18 and one aged 26. The gunman fired between 500 to 600 rounds into them before he was finally stopped. I wonder if the message writer knows what it is like when a car is ambushed and four people are shot to death at close range (just to be sure they are dead)--one of them a 9-months pregnant woman?

Yes, Israel did go into Gaza--after  tens of thousands of bombs were fired on its civilians. Yes, a lot of Gazans died, but in the end, even Hamas admitted that the majority were fighters. Civilians died but they were not targeted. In fact, Israel dropped leaflets and called the homes before they attacked (do you know any other army that does this?). Hamas uses civilians as shields.
The fact is that Israel is the Only Democracy in the Middle-East, and the Only Country in the Middle-East that dismantled Arab refugee camps. ALL of the Palestinian Refugee camps are in Arab Countries! Palestinian Arabs in Israel were given full citizenship, they  have elected members in the Israeli government (who sadly, are trying to destroy the country). Jews and Arabs are both Doctors and Patients in Israeli hospitals. The list is endless, yet in cities all over the world banners of hatred will fly and letters like the one above will be returned with insults.

The clip below highlights the narrow-mindedness of those who hate--just because it is the "in thing" to hate Israel. Hopefully good people will not partake in this hate-fest.
Posted by Jerusalem Vistas~Israel Vision at 3/09/2011 01:42:00 AM