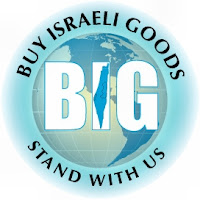 Today, 30 March 2011 has been chosen by Israel-haters around the world to boycott products from Israel. Bare Naked Islam has the complete story.
In response, a group called Stand With Us is running a counter program called BIG--Buy Israeli Goods. They encourage people to stand up and say NO to BDS and fight back by buying Israeli products.
While the people of BDS claim to have righteous motives their  own words say otherwise. Accusations of apartheid against Israel ring hollow. There is no mention that Israeli Arabs have more rights than they would have in any Arab country, or that women's rights are protected in Israel--both Arab and Israeli women. Nobody talks about the fact that while Arab-Israelis freely live, shop and build where they please, Israelis who take a wrong turn into an "Arab" neighborhood risk being lynched and building in Arab neighborhoods is deadly. There is so much more, but those that hate do not wish to hear it because it is "cool" to hate Israel.
Most telling are the actions of Omar Barghouti, one of the founding committee members of BDS. He was born in Qatar, grew up in Egypt and later moved to Ramallah (West Bank) as an adult. Did you know that he is currently studying for a Masters Degree in Philosophy--at Tel Aviv University (that would be in Israel). Is that not hypocritical? Would anyArab country allow a student to attend it's university while lobbying for the destruction of that country? He would be dead and gone--but Israel not only allows him freedom of hate speech, we educate him as well.
If you are really interested in Truth watch this clip. At 4:55 hear Omar Barghouti's own words on the goal of BDS--this is what they truly want--it's all about hate...
Posted by Jerusalem Vistas~Israel Vision at 3/30/2011 12:47:00 PM