A Gift from the UK

Last week a terrorist planted a bomb at one of the busiest bus stops in Jerusalem. The resulting explosion injured many and killed one woman, Mary Jean Gardner. Originally from Scotland, she was a Bible Translator studying in Jerusalem. Immediately after the explosion ZAKA volunteers struggled to save her life, but ultimately Ms. Gardner died of her wounds despite paramedics' efforts. British Ambassador to Israel Matthew Gold praised ZAKA for its dedication to providing aid “regardless of religion, sex, race, or nationality.” ZAKA's determination could serve as an example to the world. 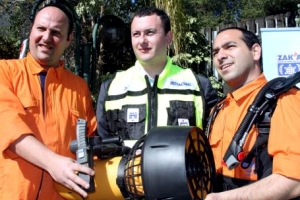 ZAKA representatives were invited to the Ambassador's home for a modest ceremony in which he gave the organization a new device with the potential to save lives. The device, a small, technologically advanced underwater “scooter”, will help ZAKA's diving unit reach drowning victims quickly, and search bodies of water more efficiently. The device also allows divers to move quickly without expending energy, thus allowing them to save their energy for resuscitation efforts.
Roi Rachamim of the diving unit demonstrated the use of the device in Gold's backyard pool.

ZAKA was started by a group of hareidi-religious yeshiva students, volunteers, dedicated to gathering human remains from the grisly aftermath of terrorist bombings in order to allow for proper burial. This has developed into a large-scale volunteer organization that assists in search and rescue operations, disaster response, first aid, and the recovery and identification of body parts. Members of ZAKA go to disaster areas around the world to help in recovery and identification.
Posted by Jerusalem Vistas~Israel Vision at 3/28/2011 04:36:00 PM