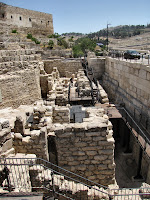 If you are in Jerusalem or are planning to visit you can now walk under the Old City walls and view the 2,500 year old finds that have been uncovered at the archaeological dig just outside Dung Gate and the Western Wall.
The Ophel Walls site has been set up to allow visitors to walk through and actually touch the stones, some of which date back to the First Temple Period.

Some of the external walls are thought to be part of King Solomon’s fortifications of the city (I Kings, Chapter 3). The four-room gatehouse, which is fully uncovered, is said to be the Water Gate described in  (Nechemiah 3:26).
Among the many items unearthed was a real treasure of 250 Gold Coins from 1,300 years ago. It is thought that they were hidden there by the home owner. 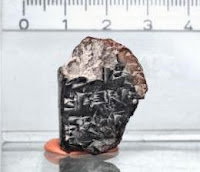 A thumb-sized piece of a 3,000 year old clay tablet covered with cuneiform script~said to be the oldest written document ever found in Jerusalem, was also found. Now on display in the Davidson Center across the street, the fragment is described as an archived copy of an Accadian-language letter that Canaanite King Abdi-Heba wrote to the king of Egypt.
On the floor of the building, twelve large clay containers (called Pitasim in Hebrew) used to store oil or wine were found. On one of them the Hebrew writing can be read. They have been been placed exactly as found for visitors to see.
Arutz 7 paid a visit to the site and posted the story along with this video.
Posted by Jerusalem Vistas~Israel Vision at 6/22/2011 05:16:00 AM