Protest in the Canadian Parliament 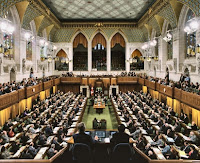 A 21-year-old girl became an instant celebrity Friday after she silently disrupted the Speech from the Throne by holding up a “Stop Harper” sign she had smuggled in under her skirt. She was escorted out and fired from her job in the Senate, but says she is elated by the positive reaction to her 20-second act of civil disobedience. I will not print the name, but you can read the article HERE.
The key point is not the protest. She was hired as a page, then abused her position. Her grievances are not the issue--she  has every right to protest, but she should do it on her own time, not while on the job--even if that job is in parliament.
She now claims to have received job offers, but her focus is on building a strong “resistance movement” and she is looking forward to some coming rallies. According to the article she says the Conservative Government policies on the environment, especially climate change, are destructive. She wants Ottawa to spend less on fighter jets and corporate tax cuts and more on social programs. It would be interesting to know how she plans to fund her resistance movement--with help from corporations or perhaps by government grants?

So, here is yet another young person, not interested in finding a job to earn a living, but  in protesting--and for what? The climate change issue is a book series in itself,  however, the area of social programs is interesting. Is she campaigning for more jobs for the unemployed, help for business start ups or things like not shipping jobs abroad? Does this mean she wants more handouts for those who will spend the majority of their lives living off the  taxpayer's purse? Here is another example of the socialist mindset that the schools are embedding in our youth--to the tune of tens of thousands of dollars.
The idea of working hard for your pay, earning what you want, seems to be long gone. Now, the new mantra is social programs, and protests to make the government pay. Sadly, not one of them is asking just how they expect the government to pay when the number of people  putting money into the tax system will soon be surpassed by the number drawing it out.
Posted by Jerusalem Vistas~Israel Vision at 6/06/2011 11:39:00 AM