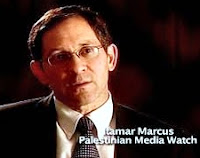 If you watch only one video I strongly suggest that this be the one. Many times we have posted items from the web site of Palestinian Media Watch. In this clip, the Founder and Director, Itamar Marcus speaks to the 4th Jerusalem Assembly about the vital work his organization does. He gives an insight into the "Palestinian" society and their way thinking and how they control  thought via the media.

During his talk, Mr. Marcus previews videos that have been taken directly from Palestinian TV Channels, officially sanctioned by Mahmoud Abbas~and which are completely against the "Peace Process" that Abbas is always accusing Israel of breaking.

You will see time and again how PA TV broadcasts false information claiming Jewish Cities and Holy sites as "Palestinian", but It is not only Jewish sites that the PA is trying to claim as theirs~at 5:45 in children sing of "Nazareth~the Arab Fortress". Of even more interest to Christian believers is the recent clip of the Mufti of the PA saying that Jesus was a Muslim and a Palestinian, and at 29:43 in a children's TV play, children compare Arafat to Jesus, saying "Yesterday they crucified Jesus, today they (Jews) poisoned the father, the Elder (Arafat)".

This is all part of the Arab taqiyya~and we all know that if you tell the lie long enough and loud enough, eventually people will accept it as truth. So the children of the PA (and their parents) have the lie drilled into their minds on a daily basis, which is then screamed to an uneducated world, and lo and behold it is suddenly Israel and the Jews who are the cause of all the worlds ills.

If you need more proof, watch at 19:57~you will see the "newest" lies claiming the biblical heroes as being "Palestinian Muslims", right down to Moses the Muslim who really led the Muslim children out of Egypt. You really can't Make this Stuff Up!!

Some of what you will see may be shocking to you, but be aware, These types of films are shown daily on Palestinian TV with the Approval of the Palestinian Leaders, including the Peaceful Mahmoud Abbas!

Palestinian Media Watch has been showing this information to leaders around the world. Sadly, it appears that they are Not Listening! It remains to the ordinary citizen to call their elected officials to task and demand they stop dealing with the very people who would eliminate freedom and human rights. Everyone Needs to watch this video and be aware of the hoax that is being foisted on the world.