One of the speakers at the 4th Jerusalem Assembly, was member of the Israeli Knesset (Likud) Ayoob Kara. MK Kara, is a Druze-Israeli who lives in Isfiya, Haifa District, and is Deputy Minister for Development of the Negev and Galilee.

MK Kara, is a staunch, outspoken supporter of Israel~Indeed, there are many Jews who could take a few lessons from him!

MK Kara recognizes the danger of Iran, was opposed the withdrawal of Jews from Gaza, supports Jewish settlement in Judea and Samaria, and suggested that a "Humanitarian Flotilla" be organized for the citizens of Syria. 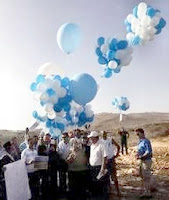 His family served proudly alongside Jews both before and after the establishment of the state of Israel, and he himself obtained the rank of Major.

In December 2010, when Iranian President Mahmoud Ahmadinejad visited Lebanon and announced that he would go to the border and throw stones at Israel, MK Kara decided to prepared a greeting. Speaking with local papers MK Kara stated:

“We are planning to fly 2,000 balloons across the northern border to Lebanon when Ahmadinejad comes for a visit Wednesday. The balloons represent the fact that the Jewish people have come home after 2,000 years of exile, and they are not going anywhere.” ...And We Say Amen to That!