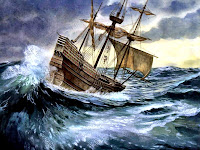 There are many versions of the original Thanksgiving Feast--apologies for any errors in this account. The point is to send greetings to all or our friends (and everybody else) celebrating today!
Thanksgiving is always on the fourth Thursday in the month of November. The first Thanksgiving Dinner can be traced back to the 16th century. According to the story, about 102 pilgrims crossed the Atlantic in the year 1620 in a ship named Mayflower. They traveled for nearly two months with extreme difficulty. Most likely they were kept in the cargo space of the sailing vessel and not allowed on the deck due to terrible storms.

After 66 days the pilgrims reached Plymouth Rock on December 11th 1620. Apparently this was not their original destination, but the storms had blown them off course. That winter 46 pilgrims died due to the extreme cold. In the spring of 1621, Squanto, a native Indian taught the pilgrims to grow food for their survival. That summer there was a severe drought, so the pilgrims called for a day of fasting and prayer to please God and ask for a bountiful harvest in the coming season. As the story goes, God answered their prayers and it rained at the end of the day saving the crops of corn, beans and pumpkins that the Indians had taught them to grow.
In the autumn of 1621, they held a grand celebration to thank God and invited the Indians who had helped them. This communal dinner is popularly known as “The First  Thanksgiving Feast”. There is however, no evidence to prove if the dinner actually took place. Some historians claim that because the pilgrims were so religious that most likely it would have been a day of fasting and prayer but most people say that it really was a feast. 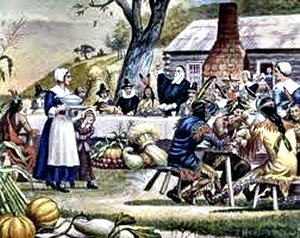 According to the first hand account written by the leader of the colony, the food included, ducks, geese, venison, fish, berries etc. There is no evidence to prove if the customary turkey was a part of the initial feast.
Because of the diminished supply of flour that year, they did not have any kind of bread. Pumpkin pie, a staple on every dinner table, is unlikely to have been a part of the first thanksgiving feast, but they did have boiled pumpkin.
The feast took place outside due to lack of large enough facilities and continued for three days. There was not another feast until 1623, when there was another severe drought. In the year 1676 Governor Bradford proclaimed another day of thanksgiving. In October of 1777 all of the 13 colonies joined in a communal celebration which also marked the victory over the British. 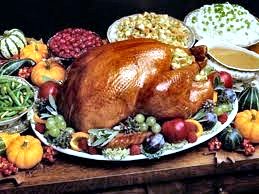 Events and changes occurred over the years. A magazine editor, Sarah Josepha Hale, who wrote the nursery rhyme Mary Had a Little Lamb, spent 40 years writing to congressmen, lobbying five presidents, and writing countless editorials in her campaign to create an official day of thanks. Finally, President Lincoln made his famous Thanksgiving Proclamation of 1863 officially making the last Thursday in November the official Day of Thanksgiving.
To all of you, and especially to the members of the Armed Forces who even today are putting their lives on the line for us, Happy Thanksgiving, and our wish that the Lord Richly Bless You All!
Posted by Jerusalem Vistas~Israel Vision at 11/25/2010 01:05:00 PM