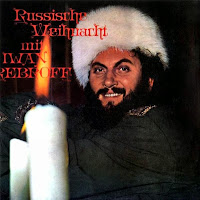 Christmas Day has a plethora of memories for each and every one of us. Sometimes, in our jet-set age we forget the days before DVD's, CD's "Tapes", and the internet. Then we had "records" and everyone had their favorite Christmas Album. One that brings back memories from many years ago is "A Russian Christmas" by Ivan Rebroff. (31 July 1931~27 February 2008).

Born as Hans-Rolf Rippert, in Berlin, Rebroff was actually a German singer (allegedly of Russian ancestry). His extraordinary vocal range of four and a half octaves ranged from soprano to bass. *To get an idea of what that means, listen to  "Evening Bells" below.

Ivan Rebroff described himself as international, the "connection between East and West". Famous for singing Russian Folk Songs, he also performed opera, light classics and folk songs from many other countries. During his career he performed over 6,000 concerts, including a two-year seven-day-a-week stint at the French opera, singing, among other greats, Fiddler on the Roof. Even when he was well into his seventies, Rebroff still performed twelve shows in fourteen days on tour.

You May Ask~Why All This Trivia on Christmas Eve??

Perhaps because many become so caught up in the "preparations" that it is difficult to slow down and take the time to remember what the purpose of the day is. We are inundated with Christmas Plays, Concerts, Choirs and the frenzied jingling of reindeer bells everywhere we go. In the midst of it all we should be sitting in a comfy chair in soft light, feeling that all is right with the world as we await the "Holy" moment~but do we?

The right music soothes, and when Rebroff sings, each word in each song has such depth and feeling that it flows, soothing the body, so the soul can step away, and look to the true meaning of the day, which has almost been lost in our time. OK~maybe not for everyone!

Never-the-less, take a few moments to lower the lights, relax in a soft chair and listen. The first clip is a Russian song that translates into "Evening Bells". The second clip has two "musts" for Christmas~Silent Night (one of his very best) and O' Tannebaum.


From Our Jerusalem Vistas Family to Each One of You
~Our Friends and Family~Best Wishes for a Blessed, Joyous Christmas!