A Walk Through Our Valley in Israel... 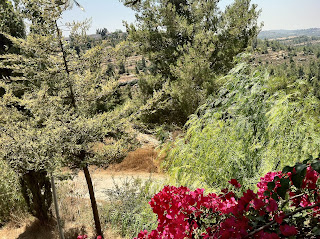 Israel is a tiny country but it is filled with wonders, from the arid desert to the snowy mountains, and the lush welcoming valleys.

The best way to see and appreciate the Wonders of God's Creation is to "walk the land". The Jewish Talmud says that “one who walks four cubits (1.8 meters) in the Land of Israel will merit a portion in the world to come.” When one is privileged to be in Israel it is easy to see why the sages made this statement!

This year, on Tisha B'Av, Jay and Meridel did just that. On the Jewish Calendar the 9th of Av, or Tisha B'Av (15-16 July 2013) is known as the saddest day of the year for Jews. The list of tragedies is long, beginning with the Sin of the Spies. The destruction of the First and Second temples, and the fall of Beitar (the last fort to hold off the Romans), during the Bar Kockba Revolt were also added to the day. Later in 1492, King Ferdinand of Spain ordered the expulsion of the Jews, wtih Tisha B'av being the last day Jews would be allowed to walk on Spanish soil. Later, WWI, which eventually led to the Holocaust began on  (you guessed it) Tisha B'Av. Jump to 1942~on the eve of Tisha B'av~the Germans began mass deportations from the Warsaw Ghetto to Treblinka. Even as recent as 2005, we watched as 10,000 Jews of Gush Katif were expelled from their homes, and their towns were bulldozed to the ground. The next day, members of the terror group Hamas moved in and began firing rockets into Israel...and the people mourned on Tisha B'Av.

It is no wonder that people in Israel fast, mourn and reflect. They also spend time walking the land, amongst the lush growth, allowing the "Land of God" to bring them peace and regeneration.

Jay and Meridel are blessed to live on the edge of a beautiful Valley. With cameras in hand they took a walk, to find "peace" in the valley. Join them in their walk, and share a portion in the world to come...