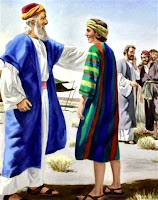 Jacob is now living in Hebron with his twelve sons. His favorite is 17 year old Joseph, "And Israel loved Joseph more than all his sons, because he was a son of his old age"...Jacob makes a precious multi-colored coat for Joseph. His brother are jealous and see him as a dreamer and tale teller. When Joseph tells his brothers of two dreams that foretell of his destiny to rule over them, it is too much and they  become filled with envy and hatred.
The brothers plan to kill Joseph, and tell Jacob that a wild beast had attacked him. Reuven intervened: "Do not shed blood! Cast him into this pit, which is in the desert, but do not lay a hand upon him"...He was trying to buy time so that he could later save Joseph. 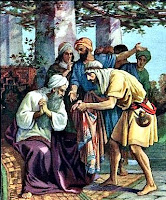 The brothers take Joseph's beautiful coat from him and throw him into a pit without food or water. While they are eating they see a caravan of Ishmaelites on their way from Gilead to Egypt. Judah suggests selling Joseph into slavery so they turn him over for for twenty silver pieces. When Reuven returns he is distraught. The brothers kill a kid and cover the coat with blood then send it to Jacob. Of course Jacob cannot be consoled over the loss of his favorite.
Judah takes Tamar as a wife for Er, his firstborn. But Er was very wicked and the Lord slew, him so Judah gave his second son, Onan to marry Tamar (*This was called a Levirate marriage) Onan knew the child would not be his so he decided to "spilled his seed". This made Gd angry so he put Onan to death as well. Judah tells Tamar to remain a widow in her father's house until the youngest son grows up "Lest he too die, like his brothers". 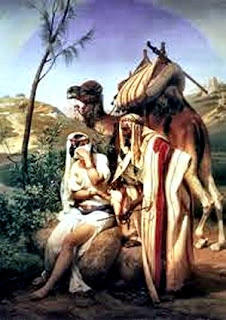 Judah's wife dies and after the mourning period he  leaves for Timnah. Tamar covers her face and goes to the crossroad where she sees that the youngest, Shelah has grown and realizes that Judah has deceived her. Judah notices her and thinks she is a harlot. He promises to pay her with a kid, but she asks for a pledge until it arrives--"Your signet, your cloak, and the staff that is in your hand". Judah agrees. As a result of their liaison Tamar conceives--she leaves with the pledge before the kid is delivered. When her pregnancy becomes known Judah accuses her and sentences her to death. But Tamar shows him the "pledged items" and he admits his mistake in not giving her to his son. Tamar bears twins--when the hand of the first appears the midwife puts a crimson thread on it. Then the hand is drawn back and the other twin is born causing the midwife to declare "With what strength you have strengthened yourself!". When Judah sees this he names him Perez. Tamar's strength of character and determination produced Peretz, whose descendants would be David and his dynasty, and eventually the Mashiach. 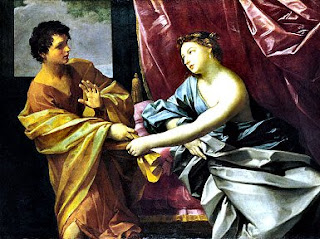 Meanwhile the slavers sell Joseph to Potiphar, Pharaoh's chamberlain. Joseph has integrity and managerial skills and is soon appointed to run Potiphar's household. Joseph is successful and becomes knowm for his handsome features and beautiful complexion. Potiphar's wife sees his beauty and tries to seduce Joseph, but he refuses to sin against Gd. One day when they are alone in the house she grabs his coat--but he flees, leaving the coat behind. She accuses him of trying to seduce her using the coat as evidence. His master is very angry and throws him in prison, but Gd is watching over him and he is soon chosen by the warden to run the prison. While he is in prison Joseph meets the cup  and the baker of the king of Egypt. When they have disturbing dreams and the next day when Joseph see them he notices their worried looks. They tell him of the dreams and Joseph says: "Don't interpretations belong to God? Tell [them] to me now". He interprets their dreams. Just as he predicts, within three days the baker is executed and the wine steward is re-appointed to his former position in the household. Joseph asks the wine steward to intervene on his behalf with Pharaoh, but when he goes back to his job he forgets all about Joseph.
Next week Joseph finally gets out of prison when Pharaoh has dreams that nobody can interpret. He marries, famine hits Egypt and ten of his brothers come looking for food. Joseph recognizes them and sets them up so they have to bring their youngest brother to him...stay tuned.
Posted by Jerusalem Vistas~Israel Vision at 11/25/2010 08:19:00 PM