A Canadian Who is Also a Muslim~This is the Truth! 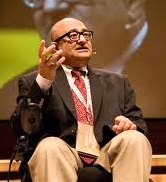 Tarek Fatah is a Canadian political activist, writer, and broadcaster. He is also a Pakistani born Muslim and the author of Chasing a Mirage: The Tragic Illusion of an Islamic State. Needless to say many of the reviews were the opposite of positive. His second book, titled The Jew Is Not My Enemy: Unveiling the Myths that Fuel Muslim Anti-Semitism, was published in 2010.

In February 2011 a massive tumour was discovered on his spine and he underwent surgery to remove it. He has recovered and is currently considered cancer free. Though wheelchair bound he has not stopped speaking about what he believes in~he is impressive to say the least.

This is not only a wake up call for Canadians, but for everyone in the free world.

*Note: There is a brief commercial before the video starts
Watch live streaming video from ideacity at livestream.com
Posted by Jerusalem Vistas~Israel Vision at 9/12/2011 01:50:00 PM