Hamas has embraced equal rights for their woman and is training them to be suicide bombers. According to a report by Arutz 7, a crew from CNN traveled blindfolded to a secret location to film the women in action.
Female terrorists are nothing new in Judea, Samaria and Gaza,  but it is rare to allow a foreign news agency to interview them and watch them training. Reporter Paula Hancocks interviewed the veiled and armed women (all from the Salah ad-Din Brigades) to the background sounds of Allahu Akbar--oh joy.

The women saw nothing unusual in fighting alongside men saying that women also serve in the “Zionist” army. ***There can be no comparison as women (and men) in the IDF are a defensive force--they  do not strap explosives chests an go out looking for innocent people to blow up. My guess is Hamas thinks the publicity will "strike terror into the hearts of their enemies" Hmmm, not sure if this is hilariously funny or sadly pathetic.
The women were interviewed at a table loaded with rifles, rocket-propelled grenades and explosives. According to the reporter the scene was “carefully choreographed for our camera and the message was clear.” 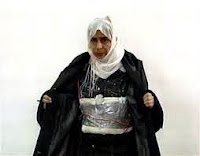 The reporter described their ages  as between 20s to 50s. She also described the 64-year-old grandmother who blew herself up four years ago--the oldest Palestinian female suicide bomber.


The primitive Islamic mindset will no doubt insure that more than one of the women interviewed will follow in granny's footsteps.

Western media now refers to these jihadists as militants--Any woman or man  who straps on explosives to blow themselves and others to bits is nothing but a terrorist--an insane terrorist--but still a terrorist.


What is particularly idiotic is that there is apparently no "virgins" or unlimited pleasures available for female jihadis--in fact, there is no reward for them at all.