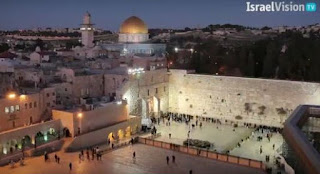 On 16 March 2016, Donald Trump stated that he would move the Embassy to Jerusalem and people cheered.

When President Donald Trump declared Jerusalem to be Israel's capital on Wednesday, 06 December 2017, the reaction worldwide was extreme! From Extreme Joy to Extreme Hatred!

Those who read the Bible were elated as President Trump became the first president to declare what Believers have always known. For others, who are are not fully informed, or just filled with hatred for the Jewish people, there were protests and calls for jihad and attacks against the state of Israel.

Jay and Meridel Rawlings, who are co-founders of the International Christian Embassy in Jerusalem were thrilled when the news broke. Below is an excerpt from President Trump's historic speech followed by a commentary on these extraordinary events by Jay and Meridel.

Please join us and all believers world-wide in prayer for President Donald Trump and his family. Join us also in sincere prayer that Jerusalem and the tiny state of Israel will know "Peace in Our Time".


Pray for the Peace of Jerusalem~Israel's Eternal Capital