Pastor Umar Mulinde: A Man with The Heart of a Lion 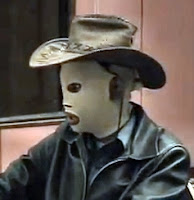 When members of the world's Christian community gathered in Jerusalem for the 4th Jerusalem Assembly, Jay, Meridel and David arranged to bring Pastor Mulinde to Jerusalem to meet with some of the leaders.

The story of Pastor Umar Mulinde and his journey from preaching Islam to Christianity is one that everyone must pay attention to. As a former Muslim he speaks honestly about Islam and the danger that it represents. Pastor Mulinde emphasizes that he does not hate Muslims. He tells us "we don't fight Muslims", rather, the fight is with the "Spirit of Islam".

We had posted some excerpts from this meeting (See Links at End of Post), but to our dismay the main portion of the films were lost. With prayer and perseverance, David was able to recover the lost footage. We are pleased to be able to post the two missing segments (Below) where Pastor Mulinde speaks honestly, from his heart, about his struggle against continuous attacks and persecution. His complete faith in the Lord has sustained him, and each time we speak with him this faith seems to have grown stronger. This soft-spoken young man remains determined to speak out and will never allow the spirit of evil to silence him.

In Part 2 (below) Pastor Mulinde reaffirms his faith and the fact that persecution will never silence him. His simply spoken words are an uplifting example for us all:

"One thing I know is that this attack cannot reduce my self-esteem, because I was attacked physically, but spiritually I am alive. The Umar Mulinde in me is alive and cannot be burned with acid. That's why I have some pain and wounds, but I can talk boldly because the real person inside me is healthy and I thank God for that!"

All of us who have had the privilege of meeting Pastor Umar and Evelyn Mulinde have been deeply touched. They have no hate, no wish for revenge~just a steadfast belief and acceptance that the Lord is in control. Many people speak from podiums and pulpits, but this young pastor speaks from his heart with a message that cannot be denied or passed over. Words cannot portray the spirit that surrounds this young family, but all who encounter this man will come away deeply affected by the fire in his heart that burns for the Lord. We look forward to the day when he will return in joy and triumph to his church in Uganda and the thousands who are waiting to great him and we pray that his message will be heard around the world.

Please continue to pray for Pastor Umar Mulinde, his wife Evelyn and their children. Pray that as he undergoes his final treatments, the Lord will ease the pain and bring comfort to this gentle man with the Heart of a Lion...

Part 2~Is The World Listening?