From "He Who is Generous" to "Needy Children Must Suffer"! 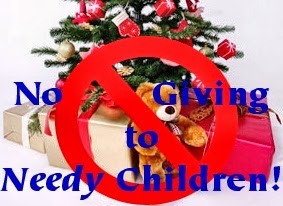 Originally, when people began calling for separation of "Church" and "State" it may have seemed harmless. Many thought that this would simply mean no prayers, or forcing one denomination over another. or something similar.

These days it has been taken to a whole new level. We have now regressed to banning toy drives for needy kids!

We are no longer allowed to call "Christmas" by its name (Christmas), we can't have Christmas trees, or Christmas plays,  and Christmas Carols are strictly forbidden.

In the western world, we have celebrated Christmas in one way or another for hundreds of years. It has traditionally been a time for Peace, Family, Joy and general good feelings for all people. Even non-Christians, such a Jews and Buddhists, and those who considered themselves "secular" joined in the seasonal festivities and merry making. During WWII, there were many stories where both sides took a break from the fighting for that one day.

Now, a school is being threatened  with legal action for filling "shoe boxes" with small items such as pencils and tiny toys for needy children. These people who are so high on their own self-righteousness are preventing one group of kids who "have" from "giving" to another group of kids who "have not". How can this be for the good of anyone? How can teaching children to give to the needy be a bad thing?

This insidious act~and many more like it~is directed solely at anything that hints at Christianity. Think about it~Where is the protest when Muslims hold their prayers in schools? Why is there no protest when we are forced to serve halal foods in schools, and why can't a Christian wear a simple cross, yet a Muslim is allowed to wear a full headdress or even a burkha (full face and body cover)? There are no legal actions when Muslims want to celebrate Ramadan or when non-Muslim kids are told to "not eat their lunch" in front of Muslims for a  month. The list is endless~but are we willing to open our eyes!

Our Calendar begins with the birth of Christ, which is marked at Christmas~should we now change that? If we are going to abandon everything "faith based" then should it not reach across all boundaries to all facets of all religions?

This politically correct insanity has invaded our lives~it is destroying our history and culture, and sucking the joy out of absolutely everything~while at the same time promoting a total lack of morals of any kind. We have become a society of "do what makes you feel good" and "I" am the most important~Anything Goes!

The time to stop the madness is now! Speak up because very soon it will be too late!


Atheist / Humanist? Groups Have Overstepped The Boundary! It's Time to Stop the Madness!