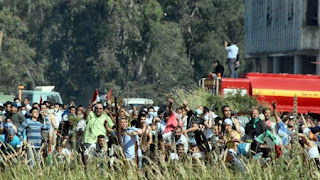 The news is ablaze with the confrontations between so called "Palestinian Arabs" and the IDF. But sometimes things are not as they seem. Apparently, a large number of these people are not Palestinians at all, but impoverished Syrian farmers from the north of the country.
The regime of Syrian President Bashar Assad has offered to pay them for attacking Israel's border! According to the Reform party, the farmers, who are suffering from a severe drought, make less than the average Syrian salary of $200 a month. The Syrian regime has offered these poor people $1,000 to travel to the border at the Golan Heights and challenge the IDF.  In addition, if they are killed another $25,000  will be paid to their families.

It is said that Assad is trying to divert world attention away from his own brutality and massacres of unarmed Syrian civilians. As in every Arab country, the call to "blame the Jews" or "take back Israel" works wonders as a distraction from the brutal actions of despotic regimes.

More clashes are expected as desperate people are led like lambs to a slaughter--in the name of jihad of course. Even though the IDF is instructed to use restraint, eventually they will have to use force as these wildly  incited crowds rush for the chance to kill a Jew or die as a martyr. Hate is a powerful force, and in the Arab world nothing is stronger than hate for the Jews, although hate for all things western or democratic rates near the top of the list.

Arutz 7 posted an article from Pulitzer Prize winning journalist Joel Brinkley, who claims that Assad is the World's Most Dangerous Man. He sells missiles to Hizbullah, the terrorist group in southern Lebanon that is the avowed enemy of Israel and the United States. Khaled Mashaal, the Hamas leader, actually lives in Damascus and does his murderous business openly from a storefront.
*Note* If you don't believe that Hamas is a murderous gang of terrorists, please follow this link and Read Their Charter--Carefully. This is what the flotillas, and so called peace activists support.
American intelligence shows that Syria has a vast store of chemical weapons. Assad had pursued a secret nuclear-weapons development program until Israel bombed it in 2007. More recent intelligence suggests that he is back at it, though this time the program is better hidden. Brinkley also pointed out that the day after President Obama sent a new ambassador to Damascus, Assad hosted a state visit by Ahmadinejad. The timing was no accident.

Brinkley has added his name to countless analysts who have questioned why President Obama supported the defeat of American ally Hosni Mubarak yet still tries to work with Assad, who openly works against the USA