Thirty-eight  years ago, eleven Israeli athletes were murdered by terrorists during the 1972 Olympic Games. Ankie Spitzer, the widow of murdered athlete, Andrei Spitzer, along with other families has lobbied for a minute of silence to be observed on behalf of the athletes, in every Olympic opening ceremony. They have not been successful, but they are still trying and now have a website dedicated to this cause. They are hoping to persuade the Olympics to recognize the 40th anniversary of the tragedy at the 2012 Olympics in London. 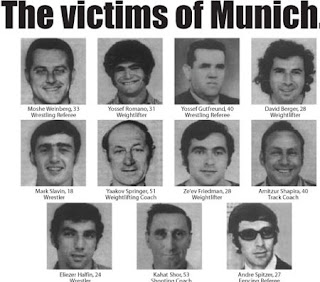 The eleven athletes were murdered in cold blood on 05 September 1972, by terrorists from the Black September group, who said their operation was backed by PLO Chairman and Fatah leader Yasser Arafat. Five of the eight members of Black September were killed by police officers during a failed rescue attempt. The three surviving terrorists were captured, but later released by West Germany following the hijacking by Black September of a Lufthansa airliner. Palestinian Authority Chairman Mahmoud Abbas, Arafat's successor as leader of Fatah, has been accused of having funded Black September's terror activities.

On 10 July 2010, Mahmoud Abbas, Palestinian Authority Chairman,  eulogized Mohammed Oudeh, better known as Abu Dauod, the mastermind of the massacre who had just died. Said Abbas, “He is missed. He was one of the leading figures of Fatah and spent his life in resistance and sincere work as well as physical sacrifice for his people’s just causes”. Abbas’ eulogy and praise for the planner of the murders came less than a month after he told American Jewish leaders in Washington that he will work to stop incitement of violence against Jews. Palestinian Media Watch posts the following:  During a visit to Bethlehem this week, Palestinian Authority Chairman Mahmoud Abbas held up a stone model of the map of "Palestine" that erases Israel. [Al-Hayat Al-Jadida, Oct. 26, 2010.  This is the partner Israel is asked to enter into a peace agreement with!

Abu Daoud, was born in East Jerusalem, and openly acknowledged his role in the Olympic attack, both in his memoir, Palestine: From Jerusalem to Munich, published in Paris, and in an interview with the Arab TV network al-Jazeera. According to Dauod, Palestinian Authority Chairman Mahmoud Abbas provided the funds for the Munich Massacre. Abu Daoud would not reveal where he resided--saying only that he lived with his wife on a pension provided by the PA.

One can only pray that by 2012 the Olympic committee and the people of the UK will see fit to remember those athletes who came with joy and high hopes to compete in "friendly" non-political games and lost their lives. The minute of silence would serve as a reminder that politics and the Olympic Games should never be mixed.