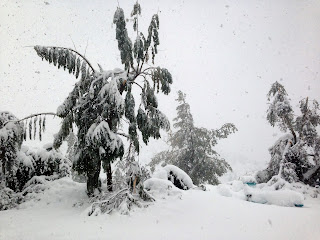 Christmas is almost upon us. In some areas, this time of year is purely spiritual while in others it is only commercial. We see people fight and trample over one another to get "that gift or item" that suddenly they discover that they can't live without !??

Through it all, there are some who relish the time with family and friends, and those who actually remember why there is Christmas at all. At Jerusalem Vistas, we like to search for interesting and inspiring hymns and carols for the season~to remind people of why we celebrate.

In that vein, we found a unique contribution from a Canadian Musician and Actor, Tom Jackson. The carol was so inspiring we have included a  few other clips that provide a feeling of "Christmas Spirit". They tell the story of a man who is known not only for his acting and concerts, but for his Humanitarian work. Each year he raises money for the community homeless shelters and those who are "down and out".  He claims that his parents taught him that being generous was a gift, and that he was "blessed with his upbringing". Tom Jackson admits that he was on the bottom of the ladder~living on the streets~and that it "opened his eyes". Over more than twenty years his concerts have raised in excess of $ 200 million for community shelters and the needy.

The Huron Christmas Carol, was taught to the Indians by priests when they arrived in the country. Listen to the words~it is the "Christmas Story" put in a way that those (who could not imagine where or what Bethlehem was) could understand the holiness.

Do take the time to listen to the interviews as well as the song. This is the story of a believing Christian who does what he can to help others~and while you watch, think about how we can all do something small in our own community, for those who will be without this year, and every year...

An Interview With Tom Jackson at His Home in Calgary